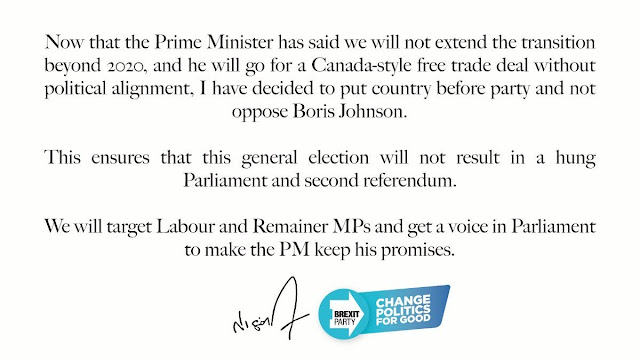 NIGEL Farage has given Boris Johnson a huge boost by pulling out his candidates in the 317 seats the Conservatives won in 2017.

Even the pound rose as the Brexit Party Leader declared his “unilateral” alliance in what is without doubt a game changer for the General Election.

Question marks still remain over Labour marginals that the Tories would need to win to get an outright majority though.

“We will concentrate our efforts into every seat held by the Labour Party and the rest of the Remainer parties.”

Boris Johnson has said he has "absolutely not" done a deal with Nigel Farage.

The Prime Minister said: "I'm glad that there's a recognition that there is only one way to get Brexit done and that is to vote for us and to vote for the Conservatives."