Uproar At The Palace 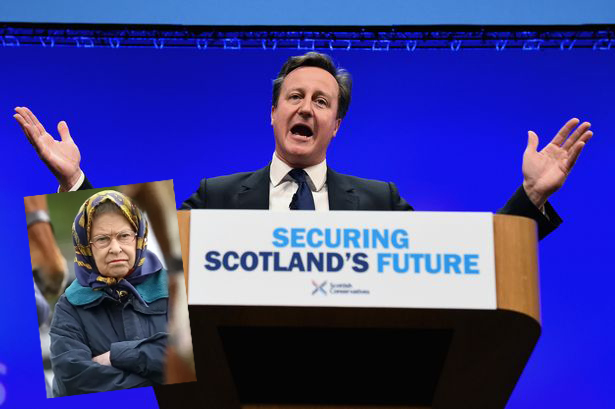 REPORTS suggest David Cameron's remarks on the Queen and the Scottish independence vote led to "an amount of displeasure" at the Palace, a source has told TBG that one is not at all amused!

Joanna Cherry QC told Twitter - “The former PM told the BBC he had asked whether the Queen could "raise an eyebrow" about the prospect of Scotland voting for independence in the days before the 2014 referendum.”

“It seems Boris Johnson was not the 1st Tory PM to undermine the British Constitution in regards the monarchy.”

“Cameron was at it too during the #indyref. Who knew?”

“Truly the British constitution is broken.”

“Make no mistake what happened was not acceptable within a constitutional monarchy.”

“A deliberate set up. This is a massive scandal!”

“Whether or not this manufactured unconstitutional intervention made a difference to the outcome of the #indyref is irrelevant.”

“The point is that it was intended to do so. Outrageous!”

“It was part of a package of measures including outright lies which were intended to outweigh the fact that the #Yes campaign had won the arguments & the campaign.”

“These are the sort of factors against which the Electoral Commission should protect.” [sic]