No Agreement After Boris/Junker Lunch 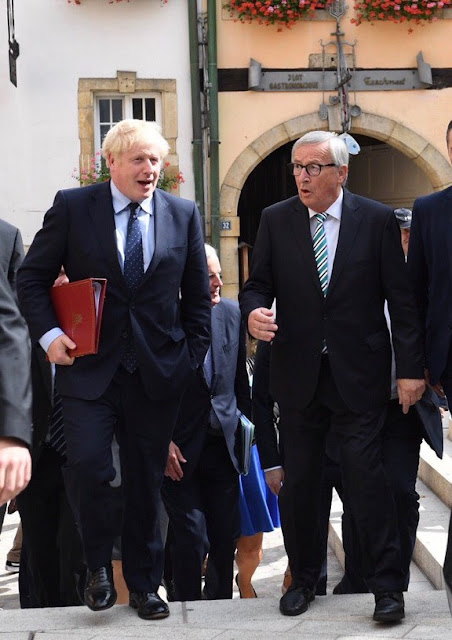 The aim of the meeting was to take stock of the ongoing technical talks between the EU and the UK and to discuss the next steps.

President Juncker recalled that it is the UK's responsibility to come forward with legally operational solutions that are compatible with the Withdrawal Agreement.

President Juncker underlined the Commission's continued willingness and openness to examine whether such proposals meet the objectives of the backstop.

Such proposals have not yet been made.

The Commission will remain available to work 24/7.

The October European Council will be an important milestone in the process."

"The Prime Minister and President Juncker had a constructive meeting this lunchtime.

The Brexit Secretary and Michel Barnier were also in attendance.

The leaders took stock of the ongoing talks between the UK’s team and Taskforce 50.

The Prime Minister reconfirmed his commitment to the Good Friday/Belfast Agreement and his determination to reach a deal with the backstop removed, that UK parliamentarians could support.

The Prime Minister also reiterated that he would not request an extension and would take the UK out of the EU on the 31st October.

The leaders agreed that the discussions needed to intensify and that meetings would soon take place on a daily basis.

It was agreed that talks should also take place at a political level between Michel Barnier and the Brexit Secretary, and conversations would also continue between President Juncker and the Prime Minister."

Tory MP Daniel Kawczynsk told TBG: “The blame rests with EU extremists who are determined to create a supranational state unparalleled in world which attempts always to trump the rights and aspirations of individual sovereign nations. Luxembourg may be happy to be subsumed into such a political entity we are not.”