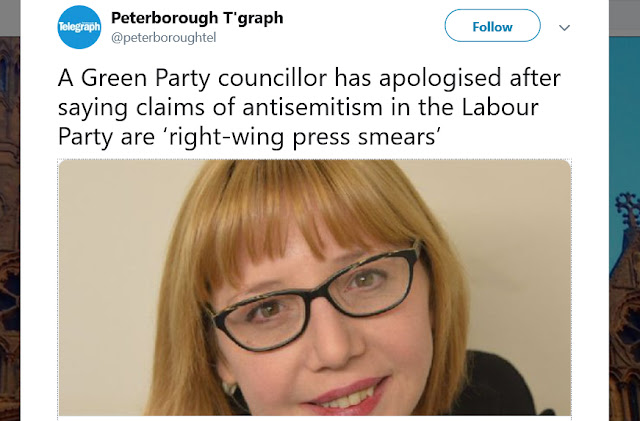 GREEN PARTY Councillor Nicola Day of Peterborough has publicly apologised after she labelled accusations of antisemitism in the Labour Party as a "right-wing press smear", TBG can sensationally reveal.

The Peterborough Telegraph reports that Ms Day tweeted: “Labour are almost not anti Semitic and you know that too. They are being smeared by right wing press because big people in big places with lots of money. The 1% don’t wanna pay tax fairly and share things with everyone else. It’s all a big lie. You know that.”

When asked again about her “big lie” comment, she replied: “To protect the elite from socialist policy.”

Labour MP for Peterborough Lisa Forbes has also had to publicly apologise over her positive engagement with antisemitic posts on social media. Lisa Forbes says she has been undertaking training to brush up on her antisemitic no no's.

Tory candidate Paul Bristow has written to Lisa Forbes asking what she's learned during her time taking the course. Lisa Forbes MP is yet to respond.