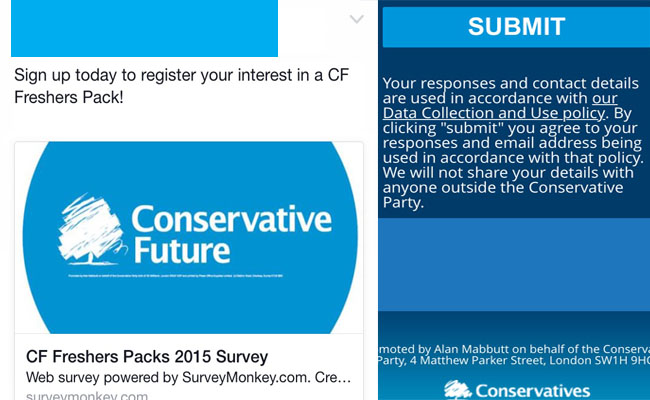 Conservative Future Members have been directed to a bogus form

AN OUTPOURING of outrage from members of University Conservative societies has begun over what appears to have been a bogus form set up to harvest data under the guise of distributing freshers’ packs, TBG can reveal.

It now seems that this was not sanctioned by Party HQ, despite the SurveyMonkey form claiming otherwise, with an official form on the party’s own website having been set up at the end of last week.

There is furious speculation as to where the data has gone, but there is widespread concern that it may be abused by third parties either electioneering for themselves in the upcoming CF elections or organisations only loosely affiliated to the Conservative party. Either way, it is understood that there are widespread calls for an investigation in to where the data from the bogus form has gone and whose possession it is now in.

Speaking exclusively to TBG, a senior source from Conservative Future said: "It’s a disgrace that this has been allowed to happen. Members fill these forms in on the basis of trust and it’s important that we work hard to maintain that trust. Given how data has been abused in the past, the party needs to have an investigation in to who has handled this data and demand that it is handed over immediately whilst prohibiting its further use."

I am sure Mark Clarke had absolutely nothing to do with this...

lol jks seems exactly like the lows he would go to for self gain.