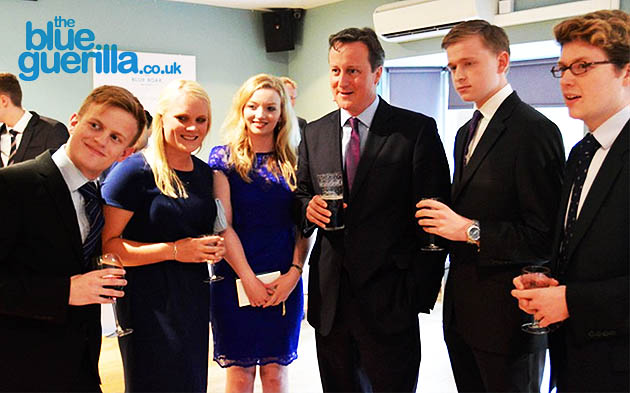 The election celebration was held at The Blue Boar in the heart of the Witney constituent was attended by local members and Conservative Future members from across the country.

Liam Walker, Chairman of Witney Conservative Future told TBG: "We were delighted to host the Prime Minister for this special event and to welcome so many friends who did so much for the election campaign in their local areas."

"The election campaign was a long hard fight and I'm pleased Witney Conservative Future played our part campaigning in target seats across the country. Working hard locally on David Cameron's campaign and especially in our nearest target seat helping Nicola Blackwood who we are pleased increased her majority from 176 to 9,582!"

"The event was a real success with everyone enjoying themselves. We hope to see many familiar faces and new ones at our future events - starting with our Summer BBQ with Alex Chalk MP on Sunday 23rd August."

The Prime Minister met with guests whilst enjoying a pint of Hobgoblin beer, according to sources, which happens to be from the local brewery in Witney Town Centre. In his speech the PM thanked Witney CF for all that they done in his own election campaign and a far in other seats. He then took questions from guests which ranged from obesity, Russia and climate change.

After the event some guests stayed for some top nosh at the Blue Boar before heading to the bar until the early hours of the very morning.