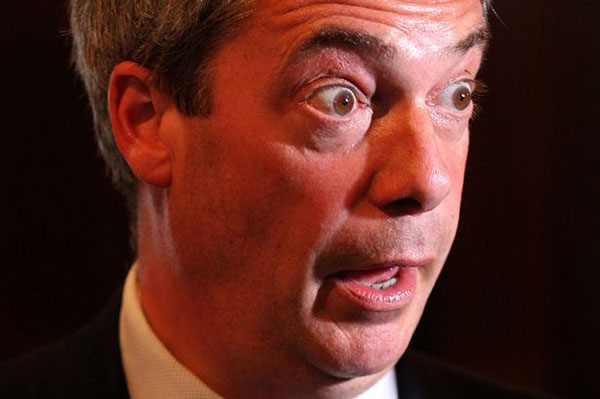 THE starting gun for the General Election Campaign in Portsmouth South has today been fired in truly spectacular fashion.

Speaking directly to the Ukip candidate Steve Harris at a political hustings in the constituency, Conservative Flick Drummond said, "Steve, you might not be racist, but the people voting for you are because I meet them every day on the doorstep!"

Whilst Flick Drummond has this morning said that some of the reporting of her comments has been taken out of context TBG roving reporter Geoff Brooking says he too has witnessed racist behaviour by Ukip supporters first hand on the doorstep in Southsea and thinks Flick is spot on.

Brooking told TBG: "I was out on the campaign trail last year and came across a typical example. A guy said to me, 'I'm fed up of all these foreigners coming here taking our jobs and building takeaways on every street corner. I'm voting Ukip'. It was completely racist and something both I and I dare say TBG would never associate ourselves with."

Whilst Drummond has been rounded upon by all kind of big figures in Ukip it hasn't stopped her from speaking her mind telling TBG, "I am afraid what has happened on the doorstep is the case."

Local Ukip councillor Steve Hastings says "its outrageous", Fareham and Gosport Ukip Chairman John Bowles says "he's gobsmacked", Stuart Potter has called on her to stand down and even Nigel Farage has weighed in by telling the Portsmouth News "if she believes that what Ukip stands for is racist then she ought to encourage many on her own side to back us."

Ironically, the Ukip candidate in question, former Farage P.A. Harris, is the same guy who caught out TBG's own Geoff Brooking for being a plant in the party last year.

Brooking told TBG: "I remember Steve well. We were both at the Havant Ukip AGM last February. He thought I was behaving really strange and I heard him say behind a closed door to John Perry 'He's a f***ing Tory Plant' if I have ever seen one."

"I kept a low profile for about a week after the incident because I knew that they were on my case and then when John Perry confronted me I owned up. I was a plant but, believe me, it was for The Blue Guerilla and not the Conservative Party."

The incident in Portsmouth South has certainly got Ukip wound up but with a five point lead over the Lib Dems and a whopping thirteen point lead over Ukip in a Lord Ashcroft Poll for the seat taken in November its hardly unsettling for Tory campaign managers.

Tory Blogger Brooking even told TBG: "I think if anything Flick has played a blinder. She's stolen some of Ukip's clothes by making it into the story that it is and I'm certain it won't go away."