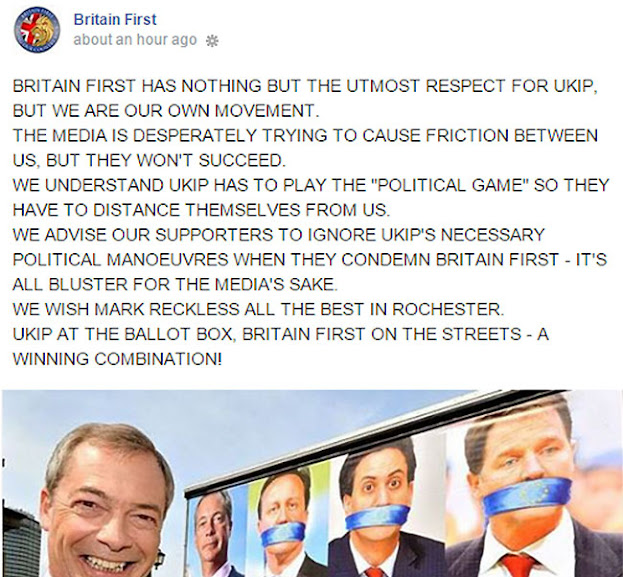 BRITAIN FIRST have sensationally backed UKIP and their candidates after dismissing what they call UKIP's "political game" in distancing themselves from the confrontational group telling people to "Ignore UKIP's necessary political manoeuvres", calling it "bluster for the media's sake".

The revealing post on social networking site Facebook by the group, who refer to their members as 'our people' like a flock from The Walking Dead, is sure to re-enforce suspicions of UKIP's ulterior motives.

UKIP candidates have been reported sharing and praising such Facebook posts by Britain First recently on this website.

Britain First's Leader and Co have also stormed a Mosque challenging an elderly Imam about displaying Muslim symbols whilst disrespecting Mosque etiquette by standing on a prayer mat with dirty boots.

I was a member of UKIP for a while. It's full of racist nutters. Anyone who says otherwise is a liar, an idiot, both or Jack Duffin (although those last two are interchangeable).

The Crawley branch of UKIP is a rogue branch made up entirely of racists. It all went wrong when Lee Gilroy, Alison Burke and Karl Williamson got chucked out of the Tories after a failed coup. The three of them then set about destroying the branch by driving out the existing members using false racism smears and bringing in their own families and Simon Darroch to be all the election candidates.

Karl Williamson then got frozen out after he started spending all his time with boyfriends in LA and St Lucia. He was never going to fit in being mixed-race and gay. Gilroy had used Williamson and had promised him the balance of power on the council but they did badly in the local elections and won nothing. Williamson then resigned as a councillor and then Gilroy as chairman. That let Darroch in to seize control who openly supports Britain First.

What is a ghaddie? Your should really learn to spell Simon and perhaps stop posting rubbish anonymously.

As is obvious I wrote an article to the papers that seemed to condem Bob. And a couple of people have described this as malicious and disgraceful and as usual the councillors have all gathered together to protect themselves from what appears to be an outside attack. But nobody has bothered to ask me why I've done it. What were my reasons ? No instead you've made a snap judgement and decided to punish me in another way by not allowing me to get on the candidates list.
So you only lead me to believe that you are complicit in what Bobs been doing or your not interested and have turned a blind eye to what's been going on in case your not selected for chair or cabinet or you loose one of those positions. Which is all sounding a bit CQC and makes you morally corrupt.

So now I'm going to fill you in briefly starting with the mayors inauguration.
Firstly I had an invite so for Bob L to throw me out was completely unacceptable and the way he did it was to. Getting his secretary to do it. And then trying to hide himself from me by hiding behind more woman.
Anyway I left. Bob had humiliated me but also the Conservative party and me staying would have made me look like the person who ruined Bob Burgesses night and I didn't it was Bob Lanzer.

So I went into town and waited for others to join me. We met in the jubilee oak and Bob had also tagged along. To cut along story short.
We all kept our wits about us but Bob was absolutely trollied couldnt standup.
In the club we went into I prevented his laptop bag being stolen three times
When we left the club Bob couldn't stand up and it was I that prevented him falling flat on his face and had to hold him up because he couldn't walk. And aren't I the person he threw out of the town hall ? What the he'll am I doing helping him.

Can you imagine if his laptop bag had been stolen with all that information on it.
We then headed for a taxi and while we waited I leaned bob against a post. Someone then said that Bob should at the very least apologise to me for earlier and thank me for him coming to no harm.
He did apologise but went further and said sorry for the vendetta he's had against me for the last two years and then confessed his love for Karl.
I asked him to elaborate and he said he had used his influence as leader to get me barred from meetings and places and done what he could to trash my reputation within the group and the townhall.
What I have put up with is -
He's also stolen my business plans and ideas and either buried them or taken credit for them
He's had me blocked from being invited to functions held by the gatwick diamond and other business forums

He became detrimental to the well being of my election campaign last year because he didn't want me to become a councillor and nor did a few others.
He banned me from group meetings and got Sally to ban me from the mayors parlour and on both occasions not one of you said or did anything in support of me. Because you fear Bob demoting or not promoting you into higher positions.

So for me Bob has been a nightmare and his confession in front of others I wasn't going to do nothing about.
I made a complaint to the association and the party board before Karls sexual harrassment complaint who responded by asking the Chairman to ask Bob to stand down. If he did done that no one would be any the wiser about anything. Him stepping down would have made the papers so I decided to write a complimentary story about Bob standing down because of fatigue and that would have been the end of it. Bob the group and the party wouldn't have been damaged and now it would have all been chip paper. Even bob was surprised and grateful for the story.
But then the group stepped in and started offering bob advice on how he should fight it without having any idea about the complaints that had been filed and the reasons why and bob stupidly did take up that advice knowing the story that had been written.
Alot of people have said I've been malicious but I havent. Not only am I the victim in the first place but I stopped bobs laptop going missing stopped him from cracking his skull open on the pavement carried him to the taxi and the wrote a nice cover story
The real problem came when a member of the group seeing my story on line on the Monday decided to phone up and tell the truth to the press and went with the sexual harassment story prompting bob to dismiss my story and defend the harassment
Now that's malicious and it came from group a member who was recently demoted from cabinet and was looking to jump on other people's bandwagon to get at Bob. I know who that member is and three members of the press and two members of group have confirmed what I know. If you want that name I'll give it to you.
So there you have it the actual truth. Not rumour or speculation
So
1 don't throw smelly mud around until you know the facts
2 contact me directly if you have an issue with me. I'm tired of rumor and speculation

And I'm not going anywhere. You won't get rid of me.
My loyalty is to the party the association area Henry Cchq and David Cameron where as councillors that don't behave can be de selected or voted out or worse.
Better for me to be in the tent peeing out rather than the other way around.

Because 'Crawley UKIP' only consists of Simon Darroch. Lee Gilroy and Alison Burke destroyed the branch through their own greed and then quit as they never stick at anything for long. Do a Facebook search of Crawley Children's Wish Foundation which the pair of them set up. They claimed it was a charity but it was never registered.

Simon please contact regarding your benefits. It's called Job Seekers Allowance and you seems to think its Job Avoidance Allowance

I'm a conservative/liberty minded American expat in London. I wanted to give UKIP a chance due to their initial claims of a flat tax and being liberty oriented - but they're nowhere close to being libertarian, have little focus, and the rhetoric regarding immigrants and minorities is off the deep end. Have decided to volunteer with the Conservatives instead.