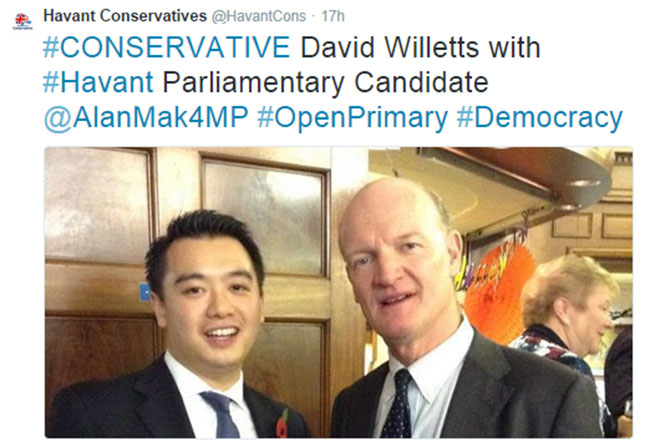 ALAN MAK has been sensationally selected as Havant Conservative Party Parliamentary Candidate in an open primary that took place just hours ago, TBG can reveal.

Mak, nicknamed 'The Knife', caused a stir during his university days at Cambridge Union but has recovered with a blistering campaign to become Havant Tory Candidate for 2015 that, "blew the rest of the field away" according to a local source.

His startling performance led one open primary attendee, who turned up specifically to vote for another candidate, to reveal to TBG, "I nearly voted for him myself".

Mak told TBG that his goal is simple - "My goal is to make Havant the best place to live, work, visit and invest in because local residents deserve nothing less."

Speaking to an open primary audience of over 300 people during a "breathtaking performance", Mak, who describes himself as a "Thatcherite, Patriot, Local Champion and National Voice", pledged to:


Mak also pledged to "fight all the way" for an "In or Out Referendum" on the EU by accusing Brussels of being "out of control".

Oh dear - not everyone shares your enthusiasm for the odious little t*sser.