Havant Tory Applicant Has What it Takes - In an Expenses Scandal. 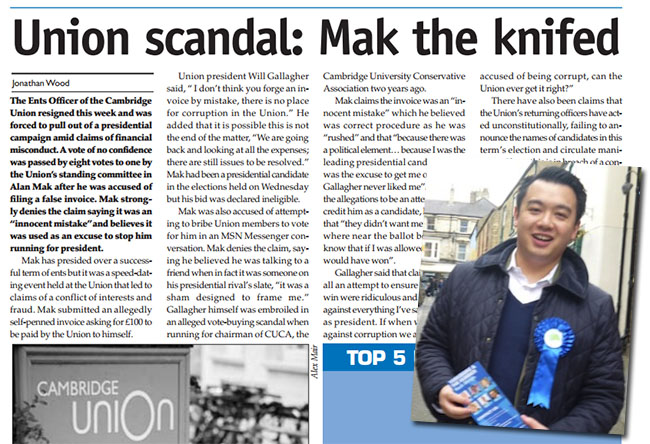 IT MAY NOT be the greatest of stories but given the expenses angle The Blue Guerilla can reveal that one of the candidates now on the long list to be the next Conservative Candidate in Havant is one Alan Mak.

According to Conservative Home, Mak is - "A lawyer by training, an entrepreneur and investor and his roles include serving as a Non-Executive Board Member for Havas UK, a digital services and advertising firm. He is also a judge and mentor for Wayra UnLtd, which advises and trains technology companies. He sits on the Management Committee of the Enterprise Forum, which seeks to link businesses in to Conservative Party policy development."

TBG has however since learned that Mak has already been embroiled in an expenses scandal. According to sources, Mak was accused of filing a false invoice and subsequently received a vote of no confidence from Cambridge Union when he was Ents Officer & was forced to pull out of a presidential campaign amid claims of "financial misconduct".

Would this be the first time someone becoming an MP has been allegedly caught fiddling expenses BEFORE they've got to Westminster?

Or perhaps he'd fit right in?