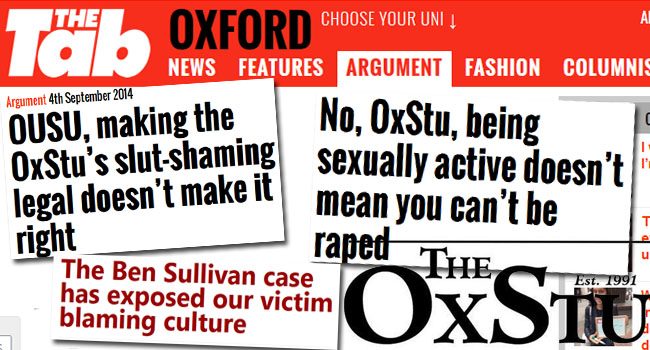 A FORMER Oxford University Conservative Association Membership Officer and appointed Editor of the Oxford Student Newspaper seems to have authored an article on the Oxford Student website, which has caused an almighty storm. The article apparently accused a rape complainant of telling fibs with the authors now themselves stood accused of "victim blaming" & "slut-shaming" by the Oxford Tab, TBG can sensationally reveal.

TBG understands that the OxStu article, titled "Sulllivan’s alleged rape victim knew her claims were false", stated - "Elsewhere, the same student is believed to have boasted of sleeping with 'Union hacks' who regularly feature in Oxford’s three student newspapers. She allegedly added that the allure of sexual encounters with well-known students was to develop a status as a 'conquest-collector'."

This promptly caused outrage in the student press which then drew a response from the student union, sending the OxStu editors on a £200 course on media law in London. This was met with more unhappiness and eventually a petition to get an apology from the Oxford Student paper, as well as to fire the Editor of the Oxford Student.

The petition currently has hundreds of signatures, and has only been up for just a few days.

TBG sources have pointed out that the article author in question is the same person who complained about misogyny last year, saying to the Cherwell that they, "Felt personally victimised by the sexist and misogynistic nature of the memes, especially as one of the few women on standing committee at the time... Still, perhaps he would do better to keep his misogyny more under wraps in the future."

The article has been removed by the Oxford Student, but continues to cause anger amongst Oxford University Students.

But if charges were dropped, and the story had proof that there was no rape, then surely the 'victim' is not a victim at all?! Ben Sullivan is surely the only victim?!