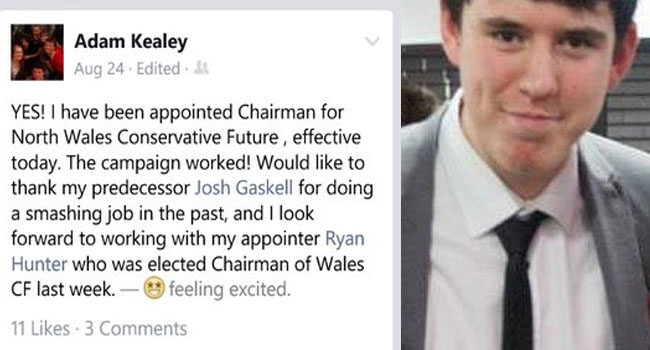 WALES CONSERVATIVE FUTURE (CF) Chairman Ryan Hunter was elected unopposed recently to his post with the immediate task of appointing area chairmen for Wales CF. One appointment included the energetic Adam Kealey for North Wales who has been promptly dismissed after just a week in the post as CCHQ Wales say that North Wales is a "unique area" that needs a leadership election, TBG can exclusively reveal.

Top secret sources told TBG before recent Tory Youth National Elections that Kealey was leaned on by Welsh CF officials not to run against Hunter for the Welsh CF top job but should stand for area chairmanship instead. This came to fruition at the CF National Election when Hunter was elected unopposed and soon after appointed Kealey as North Wales CF Area Chairman.

Adam Kealey hit the ground running advertising for roles and appointing Matt Walker as deputy but has now been sensationally told he will no longer be the N.Wales CF Chairman and elections are to be held in earnest. Probably in a shady attempt to replace the young Tory activist, according sources.

Even after being pulled from pillar-to-post Kealey told TBG - "We were going to hold an election, but CCO decided that the regional chair for Wales should appoint instead. He (Ryan Hunter) offered me the Chairmanship a few Sundays ago, which is then when I hired Matthew Walker. I was so happy he excepted. Then the Regional chair said CCO have now decided that North Wales is a unique area and needs an elected Exec, so I'm going for Chair!"

The unprecedented fiasco, encouraged by Wales Conservative Campaign HQ, will now see Kealey put together a campaign he was allegedly told not to bother with by various people before, during and after CF National Elections.

One Welsh CF'er told TBG - "Adam would make a great chair so I don't see why people have interfered needlessly in the areas affairs."

He can do whatever he wants with area chairs. Adam is throwing toys out of pram

Kealey needs to focus on his education not accruing titles and responsibilities which he is not suitable to fulfil. One would assume you could only resit your A Levels so many times....

If any of you have any guts, you'd put your real ID and not "Anonymous"