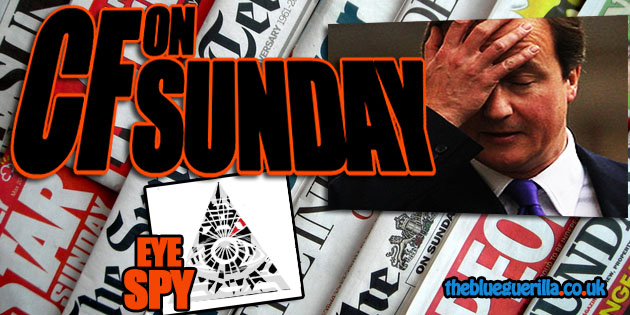 
FRIDAY night saw a meeting of top Tory & YBF minds, plus some hacks, in Greenwich. Conversation topics included the Conservative Future (CF) National Chairman Oliver Cooper's record in office and super CF'er Stephen Hoffman was also a name on many lips. Two former arch-enemies are said to have buried the hatchet at the swanky London pub, for now.

TWO young Tory activists spared their time and put effort into completing Conservative Future's essay war. The competition, which promised the prize of a signed copy of Margaret Thatcher: Personality and Power by Jonathan Aitken, was opened back in November but seems to have flopped and been swept under the carpet by the Conservative Future National Executive, according to sources. The claim has been denied by a CF national executive spokesperson who told TBG the winner was announced in January and they did indeed get a signed book.

ATTENDEES to a wild Tory Youth Port & Policy blowout last week were allegedly clearing up smashed glass at the end of the night. A claim the local Chairman doesn't remember, as "alcohol was involved".

RUMOURS of a potential vote of No Confidence in a West-Midlands chairman are rife. TBG understands the vote could be imminent and is pending a simple association enquiry, set to take place this week.

A FORMER National Conservative Future Chairman Candidate has been spotted out & about with former Tory youth national deputy chairman candidate Jasmine Rahman. Sources suggest Rahman may be getting priceless tips on how to fight a brutal contest for CF's top job.

ESSEX University Conservative Future have invited CF'ers to join them on Thursday, 13 March at 7pm in the Cholmondeley Room, The House of Lords for the Memories of Maggie event. TBG understands from Essex sources that the event is also being held in support of CF grand national leader Oliver Cooper who will be in attendance as will supreme politico don, Peter Botting.

SPRIGHTLY CF journo' Elliott Johnson is set to run for Nottingham University Conservative Association (NUCA) President next year, according to his Tweets. Last night he even called current President Jenny Huynh a "disgrace" in another blue on blue attack as the ongoing civil war gets bloody inside NUCA. Johnson told TBG however, his Twitter account was hijacked by a "drunken friend".