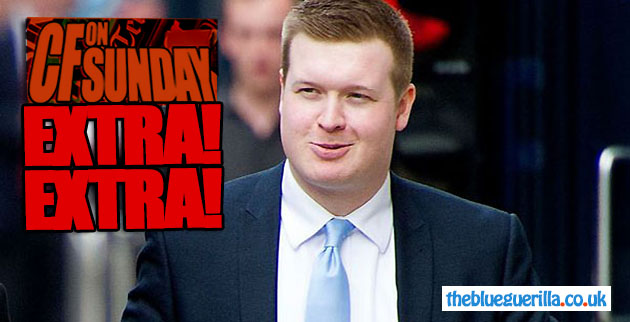 The Tory activist, who is Chairman of the Tory youth wing in PM David Cameron's constituency, seemed to despair at the current state of Conservative Future, sensationally slamming its current National Executive:

"CF is all over the place at the moment. A Christmas party that never happened. An executive fighting with each other on Twitter. No consistent national events/campaign days.

"It's embarrassing for those of us who are getting out there and working hard."

When pressed on the issue of running for CF National Chairman Witney Walker said - "Let's get the general election out of the way and then I will talk to a few people who I think would make a great team to join me in talking CF forward."

He's got nothing to offer. He tweets like he's a statesman but can't refute allegations that he was sacked as a special constable for stealing.

Also he's barely educated, the only reason he's even barely noteworthy is that he happens to live in the constituency that the PM represents.

Walker lives in the constituency of Cameron and now thinks he deserves to be the leader of CF. His branch is the most pointless place as we know we'll win there. He has a Facebook page to promote himself as if he was an MP and no one cares. Lastly, this explains why he has been up and down the country recently, with Canning I might add, just to make it look like he is doing something. People will see right through this career politician.

He'll never get on the candidates list with his history of crime. He'd be lucky to be able to stand for council.

Jeez louise! What happened to 2nd chances and rehabilitation peeps? And wasn't he like 10?

We need an outside, and NOT someone in the poisonous London CF clique.

At least he's not just another London twat studying politics at uni and working as a researcher! Most of CF don't live in London, so why do we keep puking up pricks from there. We need more people like Walker and Crozier to lead CF.

Nando's is better than KFC.

At least he's not just another London twat studying politics at uni and working as a researcher! Most of CF don't live in London, so why do we keep puking up pricks from there. We need more people like Walker and Crozier to lead CF.

Nando's is better than KFC.

He's a self promoting, Walter Mitty style fantasist without the brains to back up his political ambitions.

He may not be a twat in the same style as the London CF clique but he's a twat nonetheless. Thinking you're elite because you happen to live near the Prime Minister is pathetic.

It is good to see people from all walks of life taking an interest in politics. However, when your criminal record is more impressive than your academic record it surely brings into question your suitability for such a position. Walker's 'statesman' like tweets are hollow, badly regurgitated and have no real meaning. They have caused enough embarrassment to both Conservative Future and David Cameron, in particular his inappropriate tweeting concerning food banks.

He's got the look of a man who's pretty sure he's shat himself but he's not 100% sure, so he's carrying on regardless, hoping nobody notices.