'We Have The Votes To Call A No Confidence Motion In The Chairman Tomorrow' - Conservative Future's Broken National Executive. 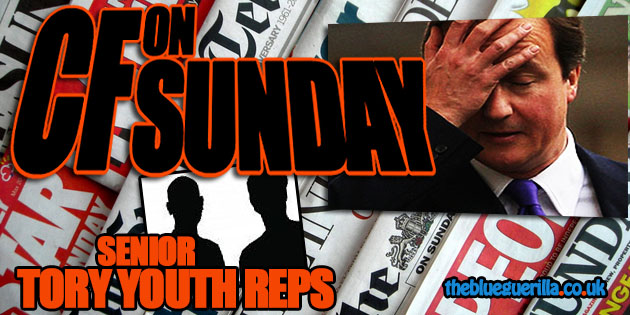 
COMMUNICATION between the Conservative Future (CF) National Executive has apparently broken-down to the point where there hasn't been an exec' meeting since Tory Party Conference in Manchester last year.

Members of the National Executive are facing serious performance concerns from within the sitting executive, regional chairmen and the wider membership.

The Conservative Future National Chairman is also facing sensational allegations of, "briefing against his strategy team and trying to have individuals removed from their regional positions", by FOUR leading CF representatives, TBG can exclusively reveal.

One senior CF member has confirmed that - "The Strategy Team were last spoken to by CF Chairman Oliver Cooper during a phone conference last summer, the National Exec' last met at start of Party Conference and there has been absolutely no follow up on the points raised in that meeting."

The senior Tory youth member also gives a remarkable insight into the workings of Conservative Future - "The Chairman has not organised anything and answers emails very very rarely. There have been two National Executive meetings since the NE was formed last May, one in June and one in September. I have no idea what his plans are for the next six months are."

TBG can confirm that the Deputy National Chairmen and National Chairman are not in constructive communication at all. According to sources, National Deputy Chairman Sarah-Jane Sewell has been a lone ranger in organising Conservative Future national events including a Halloween party, a Christmas party, an event with Gavin Barwell MP on Monday and 3 more events over the next three months, including with Iain Duncan Smith MP & Liam Fox MP.

Another senior Tory youth representative told TBG - "I have only spoken to the CF National Chairman once since last June. We have the votes to call for a no confidence motion in the Chairman tomorrow if we wanted to, both on the National Executive and the Regional College."

This time a CF regional chairman source exposed to TBG in their words, "the most recent farce..."

"One of the National Deputies got irritated by the lack of action and took the initiative of requesting an update from everyone for a Christmas newsletter. Having initially been fine with the idea, the National Chairman then failed to get back with any feedback or amendments but insisted it wasn't to be sent out until he had done so. As such, it wasn't sent out and everyone had their time wasted."

A 4th leading young Tory figure said - "This would have been a newsletter telling all CF members what everyone they had elected to do had been doing and the National Executive were not allowed to send it out."

What seems to now be a Broken Executive will not impress hardworking Conservative Future activists, who invest their free time into making the organisation a campaigning force to be reckoned with.

TBG's regional chairman source concluded - "We at least hoped for some degree of dignity, but it seems that hope was in vain."

SJS is such a fantastic 'lone ranger', anyone who can't get being he Christmas Party in February idea is clearly just a hater...

the xmas party that Cooper cancelled?

will the real SJ and stooges stand up.

Will the real wonky johnson please fock off.

How about recalling the lazy scum that make it impossible for him to have an effective exec. The only one he should keep is Rob Manning, he works hard, sack the rest.

Need to draft Crozier and Young as the winning team!!

Perhaps the national exec members asking for 'dignity' should rally around Cooper and start doing their jobs rather than behaving like spoiled children and dragging the party into disrepute.

@11:04 ever stopped to consider that they have and that the problem might be Coopers intransigence?

Apart from Cooper, and to a lesser extend SJ, the rest of the executive have done BUGGER ALL.

Cooper has done more than the rest put together doubled. The rest have been absent, totally. Not seen at any events. Not going around the country to meet with CFers outside the London bubble. Its pathetic. And they have the cheek to criticise Cooper for not doing the same?

Thank god for SJS, organising a drinks reception with Gavin Barwell. I mean who wouldn't want to spend £14 just to meet such a powerful and influential figure as the man who carried Gove's bags...

Cooper is more popular as several popls show than any of the rest of the lazy inept exec. Sjs can't even organise an xmas party at Christmas. Anyone who isn't helping cooper should resign asap as it is the will of cf members

I would love those on here who say 'Cooper gas done a lot' to list what he's actually done... That's right, as an insider I can tell you it's nothing!

To be fair, I don't have an opinion on this either way but you can't say the other officers live in the London bubble. Robinson works for our MEPs and Manning lives in Manchester, not to mention that he came to our conference in Derby, York ball and seems to be doing loads getting ready for the referendum in Scotland. Stop trying to create devision among the NE and let them get on with it.

They should do it then. And watch how they are blacklisted from the party for life.

The party like Oli. He keeps CF quiet and out of the headlines. Aside from that they couldn't give 2 fucks what it does.

Causing a row where there needn't be one gets you on a list of "people never to be promoted".

I wish Cooper's defenders would point out to the rest of us why he deserves any support when he has done bugger all in office.

He is the chairman. Its up to him to lead. What are his plans for CF? At the moment all I can see is him doing a wonderful job of destroying the entire point of a national leadership.

He does not need to ok from every other member of the exec to set these things out in writing and communicate them to the membership. I wonder why he ever ran for the office.

Nobody have the guts to put the mean and nasty comments to a face or name? Why doesn't that surprise me.

Given they have the support, just sort out the vote of no confidence and have an election. Cooper has organised NOTHING since he arrived, and then blames other people.

CF is ruined. At every election there is talk of 'change' and 'taking back' the organisation, and inevitably it all ends in disappointment. How about looking OUTSIDE the usual clique?!

Should have been Holmes

Should have been Robinson.

Out of courtesy to Mr Milner above I'll put my name to this.

There is no mechanism for a vote of no confidence in the CF constitution. It simply isn't possible. Does SJS not realise that if it were possible for votes of no confidence to take place she'd have been out of a 'job' long ago?

I realise that being vacuously self promoting takes up a lot of her time, but is it really too much to ask her to read the constitution of the organisation that was wrongheaded enough to have elected her as Deputy Chairman? Or at the very least perhaps she could get one of her more literate mates to read it for her...

Cooper seem's more interested in idle gossip than action, I saw him last week and he was prattling on about who's sleeping with who and making various boasts about his own private life. CF should be abolished, it's not fit for purpose and simply serves to keep YBF alive.