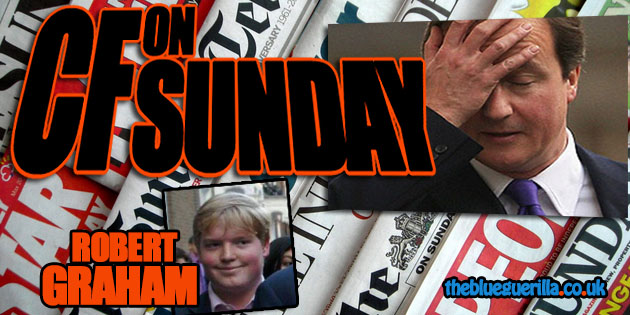 
NATIONAL CF CHAIRMAN WANNABE, Robert Graham, has come out all guns blazing after it was revealed last week he was at the centre of an investigation into controversial campaign techniques and a questionable attitude toward colleagues, TBG can reveal.

The South-West (SW) Conservative Future (CF) activist sensationally claims he was manipulated and told his opponent "will extend his lead" if he did not send the abusive statement which lead to a Party investigation, as exposed on TBG.

Robert has made a public apology for his actions toward his friend and election rival, whom local Tory leaders claim was unfairly treated during the race.

Ambitious Tory activist Robert Graham told TBG - "I feel the deepest remorse in every sense possible for calling Mr Roseff these things of course incorrectly. In true fact I have sent a message already to Mr Rossef, with my best apology deep from the heart after I'd had a long think over my actions."

Robert exposed to TBG that there was "a darker side" as to why his campaign took such a direction and blames "manipulation" by South-West CF Political Director, Harry Ives, for allegedly rushing him to release the somewhat naive & unsound statement about Robert's opponent.

Robert Graham sensationally alleged to TBG that the SWCF Political Director - "Manipulated me into sending this abusive message. Also, he had been giving me previous calls saying he will get me information about my opponent saying he is 100% in support of my Campaign, although he was actually really in Support of my opponent Mr Ed Roseff."

Robert continued - "He gave me a call at a deeply stressful time for me, after I had been Tele-Canvassing the South West Conservative Executive and I was intensely worrying about my Campaign. In this call he brought up two topics, firstly he said to not phone anyone up to Tele-Canvass them. Thereafter he went in to saying that criticising Ed's 6 Point Plan is not how to win this Election, in order to build this 'fake' rapport with me.

"I then brought up my concerns with Mr Roseff's confidence and how I thought that made him unsuitable for the role. It was then he brought up this 'Election Winning' idea of writing a message to everyone who has a vote criticising Ed Roseff's personality, really nastily as he told me to do it, by writing a list of 10 really nasty things about Mr Roseff! He said this was an 'underhand' way of winning this Election and if I was ready to do anything to win this Election, then do this. Then he told me to send a draft over to him before I sent it to everyone else. Then we ended the phone call and I said I would work on my draft.

"I admit that I was agreeing with Harry that this was the best way of winning this Election for me, however it became clear he was manipulating me round to the idea for his own benefit. It became apparent when I sent the draft to him shortly afterwards, I got a text saying 'go ahead' this was obviously Harry's way of telling me to send the message to everyone.

"I was quizzical of this because we were previously talking via Facebook and not text, therefore I texted back to him asking him to write below the Facebook message, 'It's great go ahead'. The reason I wanted him to write that is a form of security as I was naturally concerned that something like this would happen. 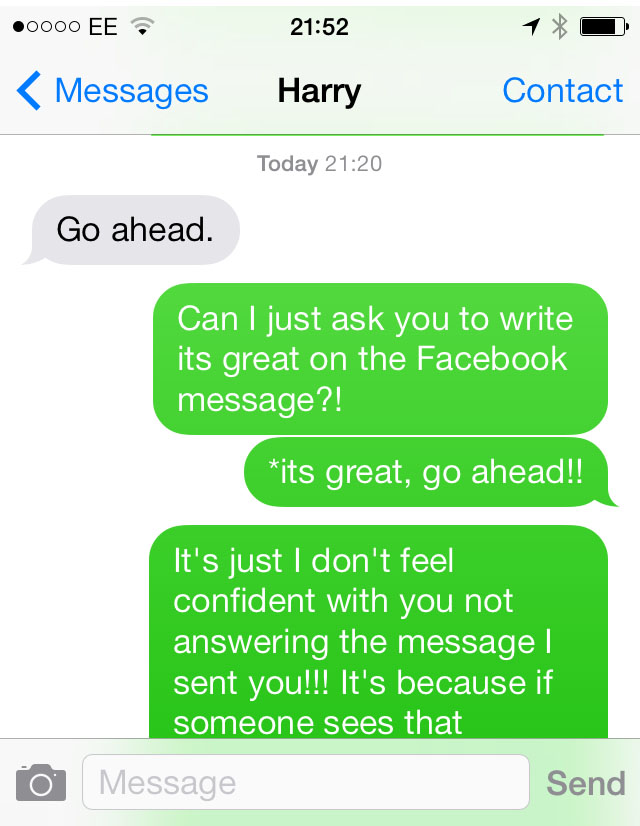 
"He then immediately brought up another problem I thought was very odd which was that he lost his charger for his laptop and he was looking for it. Thereafter I asked him if he could write me this message back later, then he said that when he found his charger, then manipulating me further by saying something like 'Ed could be canvassing now, do it quickly' and 'Ed will extend his lead'. This was to rush me in to do it without thinking.

"So I sent it, Harry wrote 'what is this shit' and I knew I had been manipulated. I then sent him some very abrupt messages trying to find out what he was doing but he had manipulated me. He then tried to manipulate me to leave the Facebook group message, by sending my a text telling me to do so. He wanted this to happen because it would make me look weak and further his benefit.

"Overall I'm quite abashed by what's happened, it caused a good friend of mine, to un-friend me and then send me a new friend request.

"This caused me remove any trust I had for Harry Ives. I know I sent the message however, I was deeply influenced by manipulation and did not think before sending it. I agree I created and sent the message but it's the message that's bad, not necessarily the person manipulated into doing it."


Would you like to take part in 'CF on Sunday'? Email; tips@theblueguerilla.co.uk

This is after all the same Harry Ives who hacked into UCL students accounts so he could vote for himself on their behalf.

Robert Graham is a contradiction. He attends and supports CF events avidly and with enthusiasm, yet he regularly undermines the organisation's (admittedly limited) credibility through some of his actions.Why couldn't he just apologise for what he did and move on? Perhaps once again an example of someone who is in CF for themselves rather than the collective good...

An upstart with no experience taking himself too seriously. If CF is to be taken seriously by the party then the chairman needs to be someone they can take seriously. Robert should get himself educated, campaign hard and think about this in a few years.

Harry Ives and the SW Chairman still haven't responded to these claims,if true he should resign immediately and apologise. Robert Graham is a great guy who looks to have been set up!!

this is the same Harry Ives who lost his bid to be UCL Tories president in spite of hacking students' emails. He then took the only dignified course, he dropped out of uni in a fit of pique and lied about becoming a stockbroker before moving back home into his parents' basement.

What Robert said was horrible and I hope he learns his lesson and that many people are finding his "fib" absolutely hilarious.