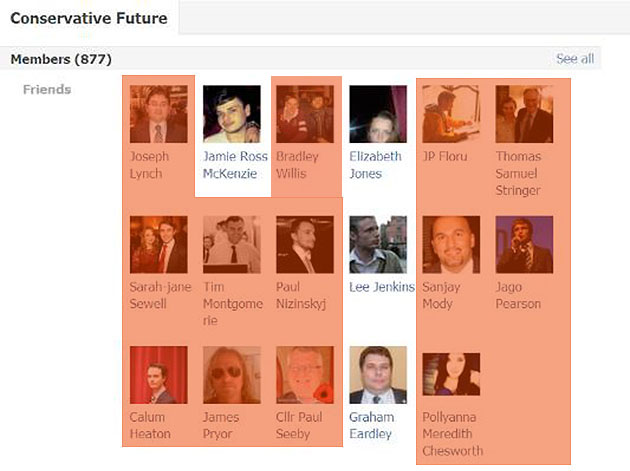 UKIP & YOUNG INDEPENDENCE (YI) are up in arms today after allegedly being repeatedly added to the Conservative Future (CF) Facebook group in an offensive by the CF National Executive. However, 'Kippers say they have requested that their inclusion in the group come to an end, TBG can reveal.

A anonymous UKIP Councillor & YI member has made a complaint to an influential Tory, that the CF Facebook Group admin has been over-zeleous in adding UKIP members, and "they're not happy".

The names in the screenshot include:

TBG's YI source alleges that when they asked the administrator, "Why are you adding half of UKIP to this without their permission?" The admin' said - "It's just a Facebook page, don't be an arse".

An administrator of the group sensationally hit back at the claims saying - "Maybe they've just realised the grass isn't greener on their side of the fence. Afterall, according to the front page of The Times today, Farage said 'UKIP is full of the wrong people'."

Tory sources have dramatically revealed that the said UKIP members of the Conservative Future Facebook Group were added over a year ago and have not left since.

As well as the two mentioned (right), one other is also alleged to have been added over a year ago and another 6 months ago.
Edited & Posted by The Blue Guerilla at 14:19:00

Murky Shadows at force. Need CUCA to wash them away.

Isn't the admin of that page Sarah-Jane Sewell? #FBgate

http://thingselliottsays.blogspot.co.uk/2014/01/sjgate.html This article has proven that Sarah Jane is involved in another scandal of blocking senior CF members from the Facebook Group.

Can't the main party just shut down CF and put these poor saps out of their misery?