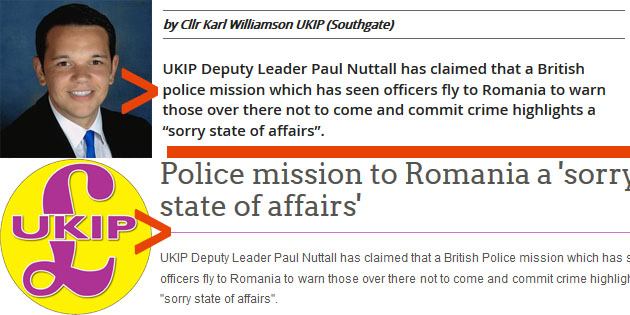 CRAWLEY TORIES seem to have found their mojo and are on the offensive as they have sensationally exposed Tory turned UKIP Councillor Karl Williamson as a copy-and-paste-cat, TBG can reveal.

Karl Williamson was rejected by Crawley Tories when he was Deputy Leader after a drawn-out spat with Tory Council Leader Bob Lanzer, which led to 98% of the association voting in favour of a 'No Confidence' motion against him and his pal, fellow defector & former Association Chairman Lee Gilroy.

Since then the Crawley Observer has given Williamson column inches in a weekly piece but the articles have dramatically been exposed as a "sham" and seem to have been plagiarised.

The embarrassing proclomation on Councillor Crow's blog listed such articles since their Crawley Observer inception in August 2013.

Crow today slammed Williamson and blasted - "All the evidence presented here (not hearsay like how UKIP find innocent people guilty) clearly shows that Cllr Karl Williamson’s local columns are a sham, and are mostly copied and pasted from national UKIP sources or from Nigel Farage in the Daily Express."
Edited & Posted by The Blue Guerilla at 15:24:00

Seriously? It is not Plagiarism if the original author allows it - and I suspect UKIP are happy for a UKIP councillor to be as on message as possible.

Cllr Crow clearly has too much time on his hands. Could I suggest he get a proper job?

Rather surprised this guy would do this. Not a blue man my self, but well done to Crow for posting this. Ukip in Crawley are just not justworthy

What a tit. Love Crawley Tories since TBG exposure. Keep it up!

Any news from Karl?

sick of hearing stories about Crow he always wants to steal the limelight. Its not all about you Crowby its all about ME !!!!

Here we go again. More Tory sleaze and who's name appears at the centre of it all again. Crow .... Bet they will be giving him a good ticking off today after once again bringing the Conservative Party into disrepute again.

That Crow is a Nasty Man always picking on the Gays. This needs to be looked at as to the reason he is obsessed with a young Karl

What is this Crow bloke playing at. Quite clear that something has gone on between Crow and Karl. Do we have to keep reading about this lovers tiff. Karl is clearly half his age and this is very sordid

I am going to investigate this matter and send out lots of emails and look like a plonker and still have no idea what i am talking about. Thats because I am really thick and talk really s l o w

Cllr Teddy Cowdray is under police investigation? Any one confirm? If so, it's about time.

This is bollox I am innocent and the police investigation with prove my innocence. I was only parked up having a snooze and did not enter the woods that day.

This is rediculous now and clearly someone in the Conservative Party has it in for Mr Crow. Is this all to do with him trying to become the Leader of the council and offering jobs and roles to people if they voted for him. We are sick of hearing about Mr Crow and his sexploits

I hope you all enjoy me pretending to be other people and peddling lies about others. It's not like I have an axe to grind after being kicked out of the conservative party.

I agree with Lee and Ian.

I agree with Ian, Lee and Duncan