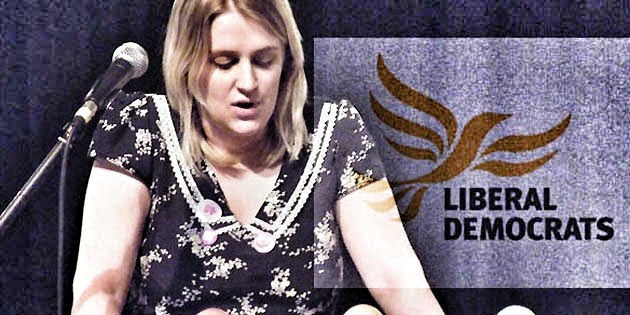 LIBERAL YOUTH (LY) Chairman Sarah Harding, could be sensationally challenged in a vote of 'No Confidence' if performance doesn't improve before the Liberals' summer conference, TBG can reveal.

Sources say LY members are furious at the inaction by their Leader and rumours are rife about the content of emails sent by Harding to a member of the Conservative Future National Executive in November.

One disgruntled Lib Dem told TBG - "It seems that Sarah came in on a lot of promises but we have yet to see anything happen. Harding's biggest success of the past year has been 'Front of House at Eastleigh' which she parrots at every moment instead of working."

Conor McKenzie is tipped to take the top job, sources say he has a "5 year plan" to become Chairman.
Edited & Posted by The Blue Guerilla at 13:01:00

you can take away her position as chair but you can never take away front of house, eastleigh from her.

In our own house we should call for a vote of no confidence for Robinson and Corbridge, is it right that they remain on the Conservative Future National Executive while living abroad in Brussels and Dubai respectively?

The person who suggested Conor ... that was a joke, right? They a spy or a Tory or something?

Jeez, I thought things couldn't actually get any worse, talk about self-sabotage!

Connor would probably make a pretty good Chair actually. Always struck me as quite a decent guy and he certainly has the experience to take LY forward. Somewhat sceptical of whether he'd actually have a 5 year plan though, I don't think he wants it that bad....

Conor is a careerist. Of course he wants it. He has hopped from position to position on the exec showing he cares very little for one area other than elevating himself.

Conor is a careerist little shit, and does have a 5 year plan. He's openly admitted it to certain people.

As for Sarah, she's bloody useless, and everyone was told she'd be bloody useless. She only won because she was against some tartan c*nt

Informed sources tell me that Liberal Youth Wales elements may be attempting to take over the federal leadership. Takes all kinds to join a sinking ship...

Anonymous @ 8.16: Conor you little shit. Anonymously bigging yourself up is exactly the type of thing you'd do. Grow up and get a real life.

She did very well in the fresher's fair campaign tho...

Conor would be great, we need his unifying guidance in Liberal Youth.
We need to weed out and eradicate the Tory's in Yellow ties!

Conor if you're going to comment positive comments about yourself at least learn punctuation dickwad. Tories*

Can't believe while this has been going on Sarah Harding STILL won't say anything. It's been Steve, Stuart and James posting about this and listening to members' concerns. Sarah Harding is only Chair when it helps her bid to win Southport. "The People's Chair" - only if she can boss The People around as Front of House.

Hell will freeze over before I vote for a douchecanoe like him. I owe the commenter above a drink. Sir or madam, you have truly made a service to grammar.

"Conor would be great, we need his unifying guidance in Liberal Youth.
We need to weed out and eradicate the Tory's in Yellow ties!"

Since when was conor some kind of hero of the left?

Anybody can hide behind the 'anonymous' tagline... And usually its people who are to afraid to have their name against something they stand for.

Surely it would be better for us to be standing together behind whoever is on the executive and not fighting among ourselves like a troop of baboons !

I have been a member since 2009 and to be honest the constant finger pointing, backbiting, rumor making nonsense is ridiculous! I would almost argue at times we are the laughing stock of the party... is it any wonder certain members don't take us seriously!

However when we want to we can be a fantastic group of people just look at Eastleigh..!

And yes I have signed this off with my name !

Doesn't Activate incorporate votes these days? Pretty sure she can be NoConned that way?

Activate is a training weekend not a conference. There is always the possibility that it might not actually be a conference too, meaning there won't be another conference until the winter, which is after this executive's term.

Pretty sure a number of votes were taken at last years activate...just saying