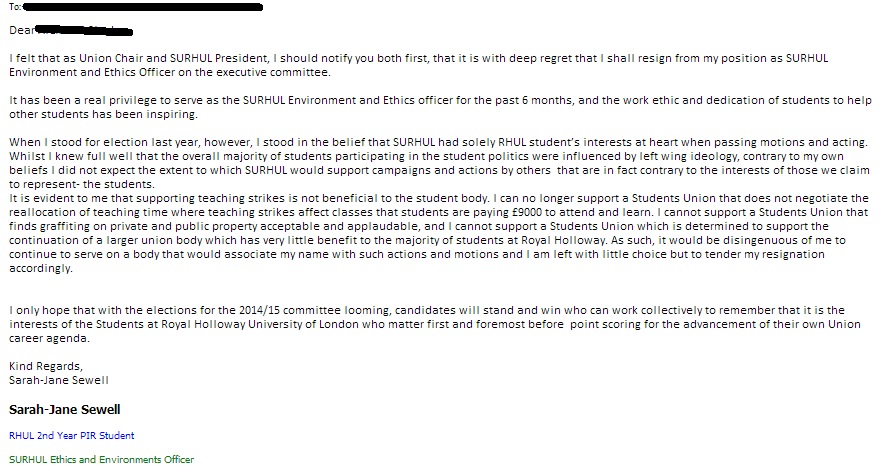 In leaked emails seen by TBG former SURHUL Ethics and Environmental Officer Sewell says that teaching strikes are - "Not beneficial to the student body". The national deputy leader of the Tory youth-wing also raged that she could not support a union that applauded graffiti on public and private property.

The move after 6-months in the role is being seen as a bold move toward a dramatic CF National Chairman bid later this year.
Edited & Posted by The Blue Guerilla at 17:02:00

Aren't all Student Unions left wing? Its the only place the socialist communist idiots can have any sort of power.

Seriously who cares about SUs. People who graduate soon realise the uselessness of them

Publicity stunt once again from SJS.

How is someone leaving a student union "sensational"?

Everytime I visit these blogs, my heart weeps for the lack of imaginative adjectives; "Sensationally", "exclusively".

Please, use a Theasaurus, I beg of you.

Awful PR stunt. She's a dripping wet at heart and is trying to prove herself as a right-winger. First she awarded herself that fake Margaret Thatcher Award for Integrity - or whatever it was - now she's leaking her own emails to TBG.

In all honesty, with all sincerity and seriousness, nobody cares.

Leaked emails? Do you mean the silly attention seeking girl just forward them to you?

She posted the email publicly straight after her resignation... how is this a "leak"?

Unless you count the first paragraph as particularly exciting or leakworthy.

Clearly some alien-lizard-Illuminati antics. Fear not, good people of CF whose minds have not yet been corrupted by these vicious interlopers, Miss Sewell (if that is indeed her real name - the lizard aliens are very cunning in this regard) will not stand a chance against the combined campaigning might of Johnny Zemlik and James Mottram, the two great heroes of the Cambridge University Conservative Association and the rightful heirs to CF National Chair and Deputy National Chair respectively.

God's speed, Blue Guerrilla, may you keep uncovering the deeds of these unearthly beings.

Displaying an almost Palin-esque level of dedication. Really fills me with enthusiasm about her potential as a possible Chairman; well done.