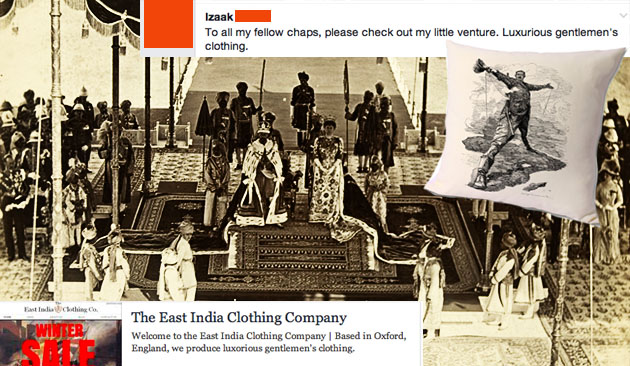 OXFORD UNIVERSITY Conservative Association (OUCA) has been caught up in another storm after one if its committee members launched a sensational colonial clothing brand donning English flags, Latin verses and a selection of Cecil Rhodes merchandise, TBG can reveal.

The eccentric clothing brand includes items with colonial prints 'for gentlemen' of "Gordon's Last Stand", a glass of scotch and face silhouettes with monocles, top hats and moustaches.

The Cecil Rhodes rage includes an eyebrow raising t-shirt, jumper and cushion. Rhodesia (now Zimbabwe) founder Rhodes' expansive colonial aspirations didn't just stop in Africa, he once said - "To think of these stars that you see overhead at night, these vast worlds which we can never reach. I would annexe the planets if I could; I often think of that."

The East India Clothing Company website ends with the Latin motto - "Deus Indicat. Deo Ducente Nil Nocet" - which in English means - 'God is our leader. When God leads, nothing can harm'.
Edited & Posted by The Blue Guerilla at 12:15:00