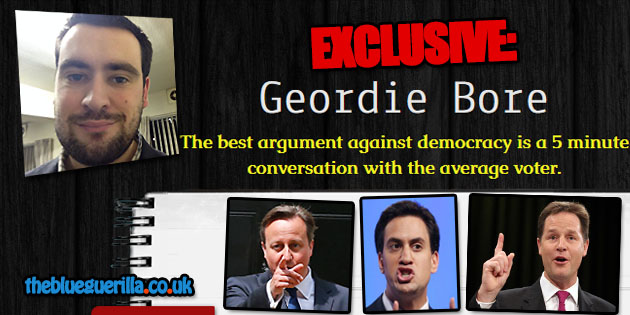 Computer repair can be a troublesome experience for many. It can be especially so for those who don’t know what they’re doing, in some respects it can be similar to politics. Computers never do anything wrong because they do exactly what they’re told.

As with politics we often overlook the possibility that we ask the wrong questions, instead acting surprised when the unexpected happens. Over the past year I’ve noticed an increasing correlation between the approaches of the two main parties and the different methodologies in terms of computer repair.

I imagined myself walking into a computer repair store and waiting for service. Just like public transport, I waited for a while and then three assistants turn up all at once; Dave, Ed and Nick. Except it wasn’t long before Dave sent Nick to get coffee.

That keenness you see in a man who has just bested his older brother for the first time, that’s Ed, he seemed quite eager so I let him take a look at my machine first. It didn’t take much prodding and poking around before he had a solution to my problem.

"It’s easy to solve but it won’t be cheap, you need more RAM, better graphics and a new mother board. Oh and this hard drive says its 256,000 Megabytes, when in fact it’s only 0.25 Gigabytes" says Ed. Yet when I questioned if this was solving a problem rather than hiding it, he answered with "yes I suppose, but throwing money at it always makes it work, it has to, it must do. It might cost a bit, but it will go faster than it does right now, I hope."

Feeling a little perturbed by Ed, I decided to see what Dave’s advice was. I would have had a faster answer from Dave, had Ed not been pestering him for a public enquiry into why Nick was taking so long with the coffee.

Dave’s solution was thus; "Your hard drive is extremely fragmented, that will cause a deficit between the information coming in and out. If you reduce that deficit by defragmenting then you will see a long term increase in performance – less spending than Ed. That DWP chip of yours is also very inefficient, swap it with a more efficient one that uses less resources, you’ll see performance gains – cheaper than Ed."

I was faced with Ed’s option of throw money at a problem without really solving it, or Dave’s suggestion that tinkering to reduce costs (and increasing efficiency) would be better. Confronted with the option of spending or saving, I still found myself disturbed at certain things. This included the question of why I would have to get rid of the 20,000 plastic soldiers Dave had found inside my case.

When Nick eventually arrived with the coffee I picked up my laptop and decided to make a dash for it. Prior to walking away, I noticed a sullen looking gentleman stood by the exit. I asked Dave, Ed and Nick who the man was; "Oh that’s Nigel, he’s never been the same since his best mate Godfrey left after refusing to clean behind the fridge".

I quickly made excuses and departed. During the walk home I bumped into this nice chap called Russell Brand who seemed a bit ‘out there’ at first. Yet he did appear to make at least some sense when he told me to ignore the advice of Dave, Ed and Nick. Russell said he had this infallible idea about how to solve the ills of the world. When I asked Russell what his revolutionary idea was, he promptly walked in front of a bus.

Realising I’d been daydreaming, I decided to go outside and get some fresh air. For those who have been involved with politics since birth, there is a real world full of real people out there.