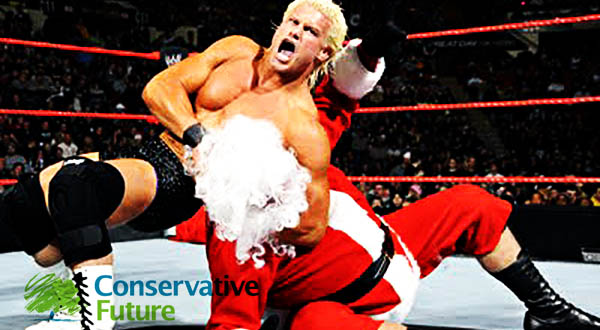 "The CF Exec' have Santa in a metaphorical headlock"

UPROAR is again the theme at Conservative Future (CF). This time activists are agasp at the announcement that this years national CF Christmas bash has been postponed, until after Christmas and when festivities have already taken place worldwide.

The national deputy chairman of the Tory youth wing sensationally announced that ticket refunds were to be sent out to the purchaser by the 10th of December, tbg can reveal. 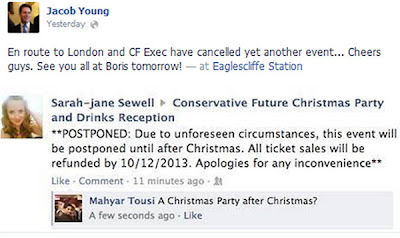 One CF'er told tbg - "It's as if the CF Exec' have Santa in a metaphorical headlock and slowly draining all his goodwill and powerful tactical delivery skills. Ironic don't you think?"

Not really the Exec's fault is it? It's one person.

SJ is awful but at least she tried to organise something. The chairman and the whole exec are totally uninterested in doing anything for the members it seems. They don't it seems even speak to each other, and two of them live abroad for gods sake. I would get rid of the lot of them.

I've attempted to contact various members of CF, with varying degrees of luck.

To be honest, I don't think I want to socialise with young Tories.

If only Cooper had been allowed to let his girl organize it as he planned. I hear she throws a good party. Well, he enjoys her at least.

To be honest I didn't know about it at all. I suspect that Cooper deliberately set it up to fail somehow to make SJ look bad.

SJ is just useless. There is no need for Cooper to rig things so she fails, she does well enough on her own.

Cooper is only so mean to SJ because of all the sexual tension. He's nearly done with his current libertarian girl and has his eyes out for someone a little curvier.

Bothe Cooper and his gf nominated for YBF awards - no look in for the rest of the exec and SJ feeling snubbed. I smell collusion.

I hear they are becoming quite the ybf power couple. Rumour is she is being prepared to stand as chair next election so he can still run CF or as his deputy if he decides to restand. YBF seem quite taken with their hold over CF and the rest of us are cut out of the loop.

She long replaced SJ as his deputy in all but name. Title to follow in the new year?

If you catch my meaning.

TBG, this took aeons so you had damn well better publish.

There. Now don't mess it up this time!

Your comment box gives different spacing compared to published comments. You suck. I give up.

Leave it out. SJ is sound,I heard she has a Dolphin Badge.

SJ is about as sound as Ed Balls.

@3.42 is quite misinformed. That isn't what they look like at all.

Well that is definitive proof that her and Oli aren't an item. That isn't what they look like at all!

What an idiot that man is. And making SJ look stupid to cover up his mistakes. Awful man.

This Christmas thing was ridiculous. SJ didn't book a speaker in time even though it was obvious that people would be busy around Christmas. The event looked crap so nobody signed up. That is very fucking foreseeable.

Also the speculation about Oli's involvement with another member of cf was bad enough. Discussing the shape of her boobs is downright disgusting. Get lives. Get out more.

Oli needs to get SJ sorted out. And by sorted out I mean fired. He also needs to give us a clear answer on this rumour as we can't afford for cf to be run in a way that appeases her.

And I will fire SJ asap.
And I love KFC
#TeamKFCFreedom

You bunch of utter weirdos and creeps. Why are you discussing some girl like that? Completely not on. Who cares if she was with Cooper or not. Just fuck right off.

As for the rest there is some sense to it. These cock-ups of SJ's are getting ridic.

[.||.] at best. a lot of shit talked by morons and virgins on this blog.
SJ needs to fuck off. Everything she does goes wrong. She has the Midas touch but for turning things to shit.

Trust me, I've seen. And wow. Better than Cooper desrves

can people just fuck off with this weird obsession with the poor girl. Who even is she?

Oh, rant over. Is there some form of recall in cf? needs to be done for the entire exec but SJ first.