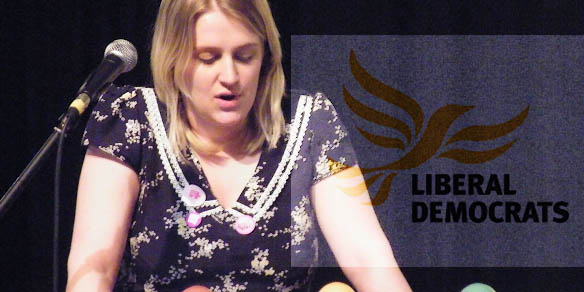 LIBERAL YOUTH Chair' Sarah Harding has come under fire today after the release of the national executive's winter report. The Liberal Youth [LY] National Executive's progress report was half a page long and lacking any sort of detail, except the fact that LY saved £900 by NOT using Royal Mail.

There was much criticism of Harding's winter report on social media, one Lib Dem sensationally slammed the report raging - "This takes the biscuit, this is genuinely the laziest LY report I've read..."

The report concludes that LY is - "Now back at (almost) full capacity on executive members and have big plans for the future. These include finalising the Schools packs, and launching the 2014 Gold Guard."

This is awful! The UKIP youth half term report was nearly two pages long!

Looks like their Campaigns Officer didn't bother to submit a report at all, that's ridiculous! http://liberalyouth.org/events/winter-conference-2013/

Terrible but still its 100% longer than CF's half term report. Cooper and the rest of the exec have made a mockery of their offices. The whole national team should just be abolished for all the good they do. No one would miss them!

I'm surprised her work report doesn't say "I was Front of House at Eastleigh" as that's the only thing she's ever done or talks about.

Reads like a kindergarten report: "Today I got up and then I had breakfast and then I went to school and..."

Useless chair claiming credit for all the ideas of others, it seems.