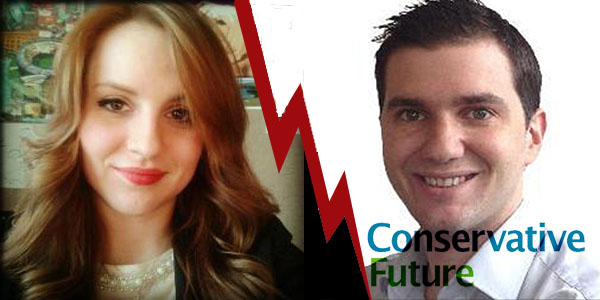 ONE MEMBER of the Conservative Future National Executive has seen their support "ROCKET" in polling conducted by Mo Metcalf-Fisher, tbg can sensationally reveal.

Mo exclusively told tbg - "One of the four CF exec' members named has seen their support rocket, leaving the other three miles behind, quite alarmingly far behind."

tbg can also exclusively reveal that as it stands 32% of those asked were not happy with what CCHQ provided for freshers, with a handful refusing to distribute the literature they believed did not represent the Conservative Party.

The poll is still open here.

Did SJ fill out the poll 20 times?

Bory Toy - If Oliver ends up showing high levels of support, his cronies will say he deserves it. If SJS does, the same people will say she rigged it. Unwinnable.

As far as I see both Cooper and SJS are just two sides of the same coin. They are equally terrible at their respective roles because they are massive egotists who only care for self publicity and bigging up their non achivements. If they actually cared about and listened to the membership as opposed the the self congratulating cliques they hang around with then they would realise this.

These polls are a way for the grassroots to attack the central clique. It's time we united to kick out opportunists ! Keep it up

I see from Chairman Hao's (note not ex chairman - he is our glorious, eternal leader) campaign event that Cooper was in Bristol anyway this weekend. No doubt getting that considerable "ego" of his stroked by a certain Bristol resident.

Considerable?! I'm amazed she can find it.

If the "ego" is as euphemistic as it sounds then considerable is not the best word choice. Scanning electron microscopes are required to find it.

While Mo's polls are better than anything else CF has, they're self selecting so are of little value.

It took me ages to realise that ego meant penis. Thanks for the clarification.

Cooper really is an ego

It should be noted that the three co-opted National Executive members have been omitted from the poll, James Morton, Matthew Robinson, and Jonny Cope.

"It should be noted that the three co-opted National Executive members have been omitted from the poll, James Morton, Matthew Robinson, and Jonny Cope" Why should they be in the poll? They weren't voted in by anybody and are largely irrelevant.