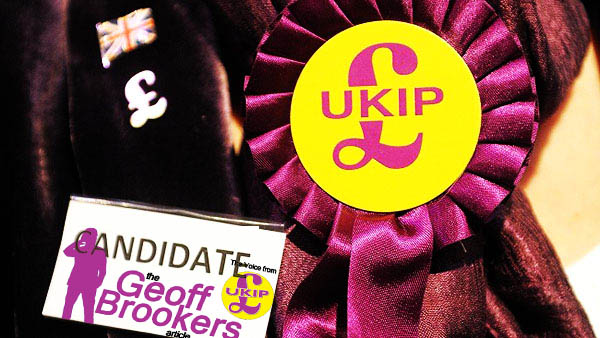 TBG can today exclusively reveal that less than 24 hours after re-joining UKIP from the Conservatives, blogger Geoff Brooking has sensationally been given clearance to stand for the party in next year's local elections.

Hustings for the remaining seats where UKIP have yet to select candidates for the Havant Borough Council authority are set to take place within days and today Brooking was sensationally added to the candidates list.

Kipper Brooking told tbg - "The hard work starts straight away. It is an honour and a privilege to even have the chance to represent UKIP."

Brooking stepped up his campaign calling upon the Conservatives to suspend the lifting of border controls next January with his famous letters in both the Daily Express and Portsmouth News yesterday, much to the annoyance of his local MP and Cabinet Minister David Willetts.

So thats why he has defected yet again. So he can get on a candidates list. 3 defections in a year, and he complains about Cameron's u-turns.

This man goes through more twists and tuns than someone navigating Swindon's magic roundabout!

UKIP came second in most of Havant in the last locals.

What is UKIP's policy on raising the legal age for obtaining a tatoo?

When will TBG be sensationally revealing Brooking's UKIP election address.... and wait for it.... election photo!