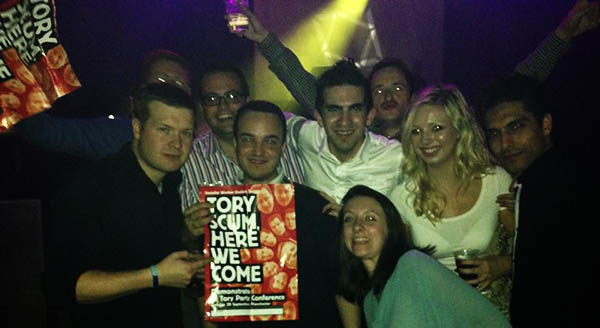 The age-old battle of Left vs. Right publicly reignited last week during Red Ed Miliband's announcement to take Britain back to the 1970's with price fixing energy bills, which led to obvious criticism, not just by energy companies but business leaders from all sectors.

Conservative Party announcements already pit the Tories on the right more-so then they were just last week with policies on tax breaks for married couples, much needed help for young people with a help-to-buy scheme and an expected 'workfare' scheme whereby long term dole claimants will have to work for their benefit payments.

One young Tory activist told tbg - "These are the right policies for the future of Britain, we are here in Manchester not ashamed but proud of this government for doing the right thing. Bring it on."

Where is miss jasmine??

Oh do fuck off about miss jasmine. noone gives a shit.