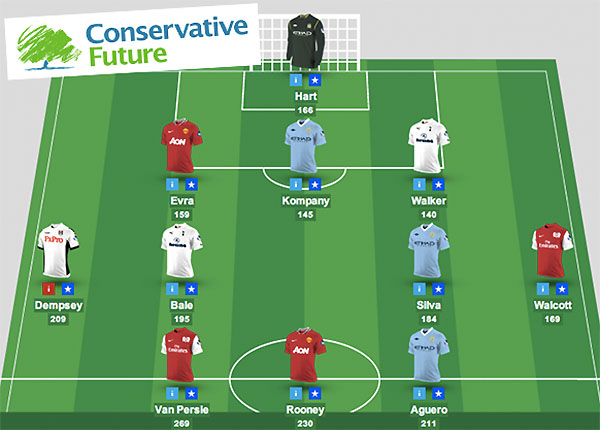 NORTH-WEST Conservative Future (NWCF) are set to battle each other in a new contest venture by the region to keep different branches closer connected.

A new NWCF fantasy football league is now open to all NWCF members, whom have until the end of the week to join.

Brains behind the idea, Wirral Deputy Chair' Membership Tara Hewitt, told tbg that the - "Idea is to help connect members across the region in a fun non political way as well as introducing some friendly competition between branches. Often with us being so spread out across the region it can be hard to keep everyone connected."

Addictive fierce battle is expected in the famously football rich north-west and Tara says she hopes to show "football is not just for boys - and my Star Trek Warriors certainly intend on giving any budding Tory Mourinho a run for their money."

Any NWCF members wanting to join can email tara1985@hotmail.com and will be sent the league code for the Official Premier League Fantasy Football website.

Can they do something else? Like an FPS? Everyone in CF back stabs each other. Such a game would let them take out their issues more directly.

Surely the more interesting story is the arrival of a new Deputy Chairman when there already was one?

Or how the work of Manning is being slowly undone throughout the region, by the rather incompetent Chairman?

Dan was sacked for associating with racists.

Jonathan is doing a great job as Chairman and Manning tweeted that just yesterday.

This is a great idea.

Levy is proving to be an excellent and highly-personable Chairman who is very popular with members. I'm not sure what his ambitions are but I think he'd be a great member of the National Executive in the future, maybe even as Chairman.