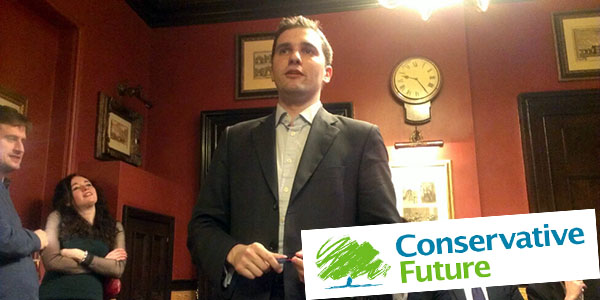 TORY YOUTH CHAIRMAN Oliver Cooper has a majority approval rating according to a recent poll of young Conservatives. 58% of those polled currently approve of the Conservative Future (CF) Chairman, with 34% against his performance thus far. This is in contrast to recent voices close to the CF National Executive whom say confidence is "waning" on the exec' for Chairman Cooper.

So long as Cooper is on the right side of membership it's presumed unlikely he'll be too fussed about National Executive views on his leadership.

Did you favorite candidate for National CF Chair win?

Oliver hasn’t had enough time to assert himself but I think he’ll do well: 31%

Oliver has done little to impress me so far: 22%

TheBlueGuerilla.co.uk came out on top (67%) as the most read website among young Tories, followed the The BackBencher and London Spin respectively.

CF members' beliefs on the biggest issues for those aged 16-30 are whom are not affiliated with the Conservatives are:

For the Legalisation of Drugs 20%

UKIP may be a threat, consider altering our position on some issues:30%

UKIP not at all threat, ignore them:10%

How likely are CF members to jump ship to UKIP?

How many people took part in this poll?

The sample would need to be over 100 to be anywhere near an accurate reflection of membersip opinion.

So 34% have a negative opinion, while only 26% a positive one, and 38% dont know. Hardly great reading figures really.