Britain Lead the way for war. 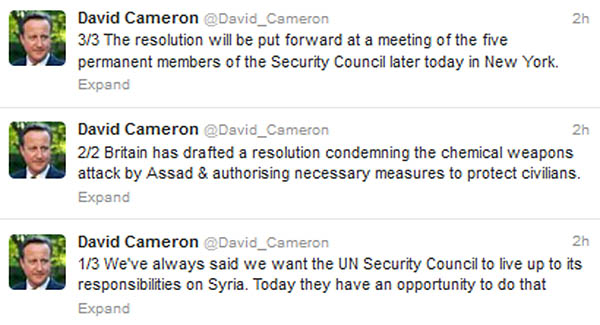 SYRIAN Leader Bashar al Assad it seems is set to feel the might of the West later this week after his regime attacked it's own people with chemical weapons on mass in rebel held areas, in Damascus last week.

The Americans initially seemed to be dragging their feet in a response but tough talking by Britain's leaders and (as of yet) undisclosed intelligence have quickly changed the attitude of the UK's closest ally.

US defence secretary Chuck Hagel told the BBC the US is "ready to go" if the decision comes for military action against Syria.

No.10 sources have told tbg that during a National Security Council meeting the PM has said Britain can't "stand idly by" in the wake of Syria's use of chemical weapons.

The UK will present a draft resolution later today at a UN Security Council meeting to "protect civilians" in Syria.