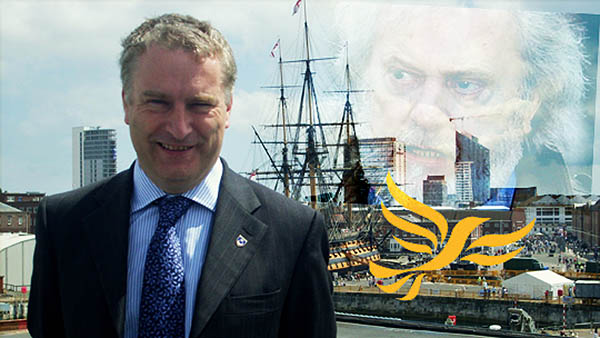 In a most unprecedented move last night Deputy Leader of the Liberal Democrats in Local Government & Portsmouth City Council Leader Gerald Vernon-Jackson sensationally put his neck on the line by standing by Mike Hancock.

Despite the Portsmouth South MP resigning the Party Whip in Westminster tbg can sensationally reveal that Mike Hancock will keep his Portfolio on Portsmouth City Council and remain a Lib Dem councillor.

"Gerald Vernon-Jackson is standing shoulder to shoulder with his boss."

"I was at a Cabinet Meeting with them both yesterday lunchtime and they even drove to London together."

South East Conservatives Deputy Chairman Jim Fleming said - "Its becoming clear this morning that he was about to be pushed so he jumped."

Hancock is being sued in the High Court by a vulnerable constituent over "very serious" allegations which he has always denied.

In a statement last night Hancock said: "I can assure you that I will vigorously defend my position and I completely refute the allegations made against me."

"I have resigned the party whip at Westminster in the interests of the party nationally and in Portsmouth."

"His role in the council does not change in any way – he remains as a member of the cabinet."

"Now he must clear his name, but until then he carries on. I absolutely support him as a councillor."

"This poor woman is a multiple victim, totally let down by the organisations supposedly designed to protect her. The Opposition need to demand an Extraordinary Council meeting for this tainted individual's immediate suspension".

"Its about time the very few decent Lib Dems left in the City disassociated themselves from this pernicious nonsense and showed some compassion for the victim instead."

"I think it is time for a new Council Leader!"