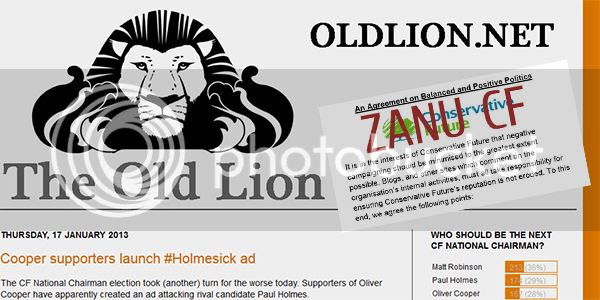 OldLion.Net is serving up attack articles

After The Old Lion launched a scathing attack on theblueguerilla for rejecting the draconian gagging order on media about Tory Youth Wing elections, it seems the self-confessed Robinson supporting blog can't handle Zanu CF regulations, and looks as if they have dumped the agreement.

The website has recently published three ferocious attacks on National Chairman candidate Oliver Cooper. The first doctoring a photo lifted from tbg, showing a seemingly guilty Oliver Cooper during a hustings event when Paul Holmes held up an attack ad targeting his campaign.

Second, OldLion.Net published the recent Robinson attack ad, saying in the opening paragraph: "Despite promising to clean up his campaign, Oliver Cooper has stumbled back into old ways. Recently, a new attack ad emerged featuring Matt Robinson. The ad, which is cruder than previous offerings...".

The article goes on - "The negative campaigning has not been confined to 'attack ads', however. Mr Cooper recently targeted both Paul Holmes and Matt Robinson following Friday night's hustings, claiming they would 'ignore overseas alliances'" - publishing tbg's Twitter snap of the row also in the article.

The Old Lion said during its sensational attack on tbg, after we rejected the Zanu CF gagging order - "We don't have much respect for... the bizarre and sensationalist approach taken by tbg when reporting this site's decision not to publish these ads."

"The Blue Guerilla have form on this sort of thing. When they don't like something, they'll happily create pieces with outlandish statements. If anything, it speaks to their sense of self-importance."

"OldLion.net is not interested in entering into cheap spats with other sites. We would much rather work constructively with tbg in ensuring good quality news coverage for all CF members."

"The approach that tbg took was unexpected and, some may venture, a little childish. Hopefully tbg can adopt a more sober approach in future."

The third fierce attack on Cooper by The Old Lion is from (tbg featured) - 'The Curious Gavin Cook'. tbg will bring you more on 'Gavin's' anti-Cooper frenzy, later.

"sense of self-importance" - can't help but feel OldLion has a point there tbg!

wasn't it their guy who made up the gagging order in the first place? ha!