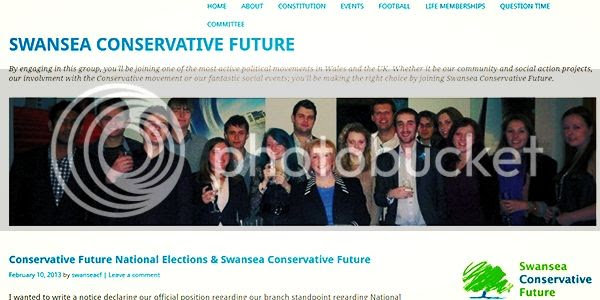 Leader of Swansea Conservative Future has slammed heavy handed tactics used by some Tory Youth election candidates in order to gain endorsements and refuses to endorse any candidate saying - "National Conservative Future committee has had no tangible effect on my branch whatsoever".

President Tom Giffard also says he detects unkind tones in emails received from candidates asking for allegiance, but have never visited Swansea outside of election time - "Some of the persons who ask for endorsements and meetings (again, not all) have neither attended nor attempted to attend any Swansea Conservative Future meetings or events until election periods."

Giffard also says - "I have received numerous emails from various candidates asking either for endorsements, or meetings with my branch to ask questions.

"The tone of (not all) but some emails is rather demanding and make it seem as though I should be honoured to be graced by the presence of a candidate for national elections and put on specific events for times when they happen to be in South Wales [sic]".

"I would recommend that if candidates wish to win the votes of any of my members, that they attend an organised event and are more than welcome to do so."

Giffard added - "Frankly, we’ve been an autonomous branch as we’re situated in an “unfancied” part of the world, and have thrived"

So much for unionism.

Swansea CF has been so successful they even have a football team. 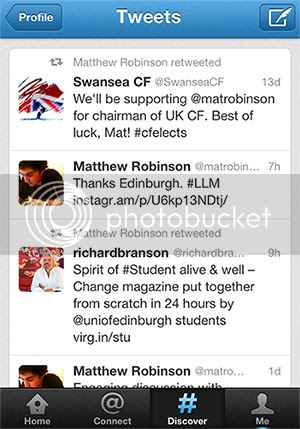 Ha. Rumour on the grapevine is that #teamjasmine is visiting Wales and we are Syked to see her! Giffard has just been peeved by certain chair candidates who are very aggressive. 'Nuff said tbh!

Only Oli bothered to venture that far from London. Robinson treats Swansea like it is his already and Gifford has had enough.

Robinson did a lot for Swansea during his time at the University. Gifford should be thankful that it was activists such as Robinson we able to lay the foundations and gifted him the branch that he has!

Loving how every time there's ever a thread about anything cfelects related there is always at least one #teamjasmine related comment - good or bad. How about reporting on the top Tory totty candidate TBG? Who is she? Is she single? Where does she come from? And when oh when can she be our membership officer? Sweet mother she has to win. I ive never been so attracted to a Tory girl in my life.

Just wanted to clarify a few points from this article. Firstly, I took the decision not to back any candidates running for any position, as expressed in the original article (which can be found on www.swanseacf.com)

I said "I do not think its either fair, or representative for myself, as branch chairman, to endorse any other member or candidate for any position. My branch in particular, is an eclectic bunch of Conservatives and not only encompasses the entire Conservative family but also a whole range of viewpoints, particularly on candidates for elections, and my personal endorsement for any candidate is not representative of Swansea Conservative Future as a whole."

I would also like to confirm that we had initially backed Matt Robinson, as the article suggests, but I had chosen to withdraw it for the above reason. Having met Matt at Party Conference, I thought he was an entirely reasonable individual, whose candidature I was more than happy to back.

However, I should not have given the personal endorsement as that entailed that I was giving a branch endorsement, which for the previously stated reason, I do not feel comfortable doing.

I wrote the article because, as clearly stated, I was becoming uneasy with the campaigning tactics of certain candidates and did not wish to participate or endorse any candidates as a result, especially when, as I mentioned, that the positions that they are running for have had no effect whatsoever on my branch.

Furthermore, I would like to reply to the above comment which said that I should be thankful for the branch Robinson left me. I'd like to add that there was a gap of three years between Matt's presidency and my own, and only one member who was a member under both.

We've also multiplied our membership by 10 since those days, so who should be thanking who? ;)

#TeamJasmine is heading to Wales too!

hahaaa Swansea CF are the joke of Wales

Whoever ends up with Jasmine on their arm, I salute you. Never met a more decent lass who's such a sound Tory. CF make the right choice and vote #teamjasmine. I sure as hell will be and I'm getting all my mates to do the same.

TBG please create a page where we can ask her questions? That or where we can leave her valentines? I've been following the blogs and the hatred she has received is horrendous. The decent CF chaps out there want to put this right! I'm not revealing my name, but I'm from the South and I've met Jasmine once. Now TBG over to you to.

Swansea multiplied its membership by 10? Bullshit. Well actually that is possible. They now have 10 members

Also its CHAIRMAN. We are not American. Stop calling your leader president, its embarrassing

Tom Giffard has as much charisma as a piece of wood

I disagree with the individual who described Swansea CF as the joke of Wales.
I suspect I know who the individual is and I would like to point out to said individual that Swansea CF run: a vibrant social calendar, social action projects and are very active in campaigning.
Do not hide behind anonymity.