Robinson to Fight for his Political Career at Q&A Amid Emailgate Allegations. 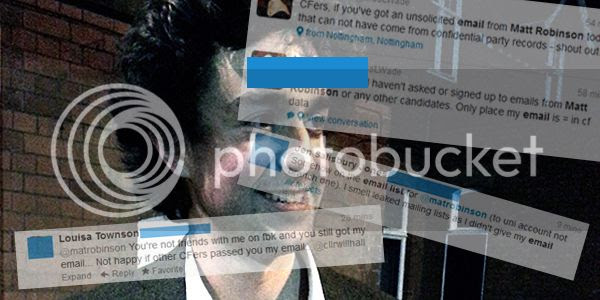 According to this years national elections Returning Officer CCHQ was not going to help candidates contact the electorate directly, saying - "You will be able to provide a profile which will be placed on the online voting site for voters to read. Other than that this will be the only way for you to officially communicate with the electorate, there will not be any official hustings."

It says at the bottom of Robinson's campaign email "You are receiving this email because you are a member of Conservative Future".

One may take from the Returning Officer's comments that every candidate would have to run a real grassroot campaign and create their own support base, through their own hard work and ability to sign supporters up to directly receive campaign material.

And understandably members tell tbg they don't want their emails available to campaigns they haven't signed up to.

So where did Robinson get his email lists?

As Matt Robinson is set to face a Live online CF Q&A session this evening, one CF'er has alerted tbg to a hashtag campaign on Twitter - #cfprivacyMATTers

He cn explain the data protection act to all of us at once. Best of luck.

Wasn't it kind of Howlett to give his housemate the email lists.

I have no idea how on earth he got my email... as I am supporting Paul Holmes I certainly haven't shared it....Will be very interested to hear.

If Chairman How has been leaking data he needs to go now. I bet the seats like Torquay he's peddling himself round wont want him either.

Not only is this sneaky tactics and unfair to the other candidates, it's a clear breach of the DPA!

Why had this been allowed to happen?!?
CCHQ need to get involved ASAP. It's a disgrace and they must get to the bottom of this with appropriate sanctions: someone is going to be in a lot of trouble over this!

I was going to vote Robinson before because I thought he was a nice guy, but after this, I have to say, I've changed my mind. Voting Cooper after this mess.