Robinson commits himself to one-term in manifesto. 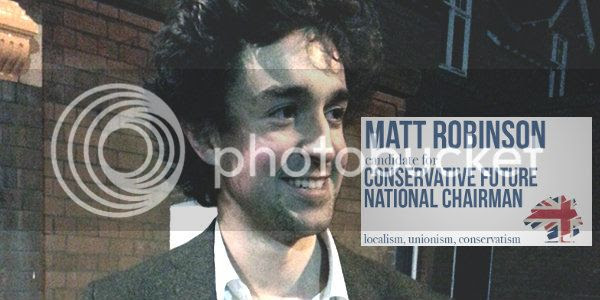 Conservative Future National Leader candidate Matt Robinson has tonight revealed his full manifesto to tbg, which he says is - "An achievable, practical, and sustainable seven-point plan".

The Robinson manifesto includes a focus on localism, campaigning & elections and Unionism. Matthew also sensationally commits to serving just one term if elected saying "If elected, I shall not seek re-election to the position of National Chairman".

Achieving all aims in one term is quite a challenge that Robinson has set for himself if he were to take the crown of Tory Youth Leader.

Matthew Robinson told tbg - "The commitments I put before the Conservative Future membership if I am elected as National Chairman are aimed to be achievable, practical, and sustainable.

"As I set out, it is not my view that the National Executive exists to step in and replace the work of Branches/Areas/Regions, but to support them. With this in mind, I believe the role of National Chairman is to be not that of Chief Executive Officer of the organisation, but to be both available to all members, and to be approachable."

Is this the same as a Howlett "one term"?

Robinson's pact with Manning is exposed for all to see. After one year he will step down in favour of him.

This clique of people think that they have a good given right to rule over us in a seamless line of succession. They must be stopped!

One terms is too many. He's a snake and can't be trusted.

One of the things I like about Holmes is that the entire focus isn't "campaigning, with a bit of social on the side as a treat".

There's this assumption, and being reinforced by Robinson, that anyone who joins CF does so solely to campaign. Yes campaigning is important and I'm not saying it isn't, but this patronising attitute thinking that's all that CF is good for doesn't make me want to vote for him.

Yeah so he can give it to Manning. Plus he already can't handle all the campaigning because he's got too much work to do. Bitten off more than he can chew!

Robinson's manifesto is clearly (in his words) practical and achievable, not claiming to do anything impossible which is a solid start. After all the smear tactics going around it's great to get some honesty and some achievable goals. A decent transparent manifesto.

Wouldn't it be refreshing if instead of insulting candidates on the basis of unnecessary personal insults and hypothetical nonsense we actually took a step back and looked at the content of this manifesto. Solid points from a solid candidate. From where I am standing, Matt appears to be the most honest candidate

The guy is honest about what he wants to achieve. I say give him a break and give him a chance to be heard! so much conjecture and nonsense on here sometimes.

Given the negative posts are just baseless smears, one can only assume there is not criticism of the actual content!

Good riddance to Howlett. Two terms too many. Roll on Robinson. #AnythingbutHowlett

With hair like Robinson's the electorate won't believe we're cutting anything...

The most honest and genuine of all the candidates, I truly hope he wins this.

Utter rubbish Robinson would just be a continuation of Howlett. They live together for Christs sake!

I don't beleive a word he says his whole campaign is a pack of lies. At least Howlett did what he said he would do. Robinson on the other hand has only held one meeting of the regional college in the last year and has hardly ever even contacted the regional chairmen who arn't his close friends.

Maybe his manifesto is so short for a reason. That being that his heart is not really in this and he just fancies the title and not the responsibilities.

@1.14. I agree, it is very suspicious to only want to serve a year. He must not really want it because no person who's in it for the right reasons would do that.

I also think it is rubbish that this year long thing is because he is 'realistic'. This stinks of someone who does not want it. The question is who has made him stand and why. Sinister