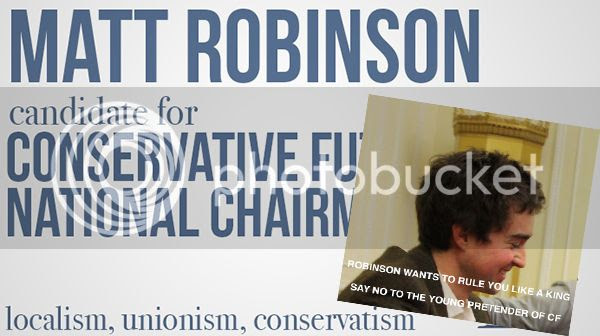 For the first time during the Conservative Future (CF) election campaign, Tory Youth Wing Leader candidate, Matt Robinson has been the victim of a vicious online attack ad tbg can exclusively reveal.

tbg can report that the ad seems to have been uploaded and published anonymously, via an online anonymous uploading service.

The ad depicts Robinson seemingly with a crown on his head and says the Chairman candidate wants to rule CF like a king. It is the image that has been used on his new website.

Edited & Posted by The Blue Guerilla

lol as far as attack ads go thats so bad it makes me want to vote for him more..

More like, it's so bad it's probably from his camp.

This isn't Honey-Watts or Cooper. It's wet, they're not wet...

tbg thinks the crown shot is quite clever actually.

I love that the Robinson camp have done a fake one. Not only did Robinson draw attention to it all over social media, it is also nowhere near as scathing as the ones made for opponents. It's actually just funny and not offensive to Robinson so I wonder who it was actually made by...

Note to team Robinson. We would much rather see real photos of you helping republicans in California than you making photo ads of yourself. Got any more with democrats Matthew?

Given he actually did promote it on his own Twitter feed, and I saw it there before I saw it anywhere else, it does kind of give the impression that he may have had a hand in it.

If you think I have the free time in the middle of my legal practice examinations to make 'attack ads' for a youth politics election, you are quite mistaken my friend.

The photo was found in the anonymous comments here:

@11.57 straight away! Bit too transparent on this one guys.

Haha. It's no surprise to see that those who are daft enough to suggest a candidate would attack themselves are opting to remain anonymous!