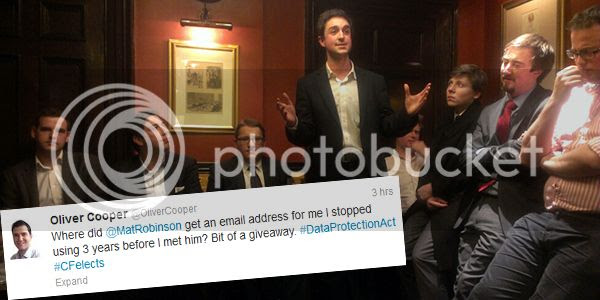 CF'ers are up in arms today over an email sent by the Matt Robinson campaign.

One CF'er in an opposing election camp expressed he couldn't understand how he was on Matt's campaign email list having never recalled submitting his address - "I just got an email from him and I'm hardly going to be on his list".

Matt Robinson is beginning to have to rush to defend himself on Twitter.

All this raises the question where exactly did Matt Robinson get his email lists from? Well, it says at the bottom of the email "You are receiving this email because you are a member of Conservative Future".

"A lot of my members, and other CF'ers from different regions have been complaining about the fact that Robinson's camp have been sending emails, without asking permission to do so first.

"More importantly though, CF members are concerned and angry that Robinson can have access to the database, and other candidates can't. This is very unfair. The current Chairman should remain impartial."

This of course has nothing to do with Ben Howlett being his housemate?

I hope that this is investigated. Obviously a breach of National CF data.

Blatantly. Clearly a stolen mailing list of branch chairs or similar. A clear breach of the dpa. Or CCHQ has gotten leaky again.

EVERYONE who is on the CF mailing list got it and it came through as a regular CF email. Dodgy and unfair to other candidates.

TBG- this is a non-story.

Anyone can create a CF list of email addresses if they google each Branch Chairman, add them on facebook etc

I'm not a branch chair, and I had it. Never given him my email, I'm voting Holmes Argyle.

I believe this is Morton's doing! My branch chairman told me today he is passing data.

Is Howlett stupid enough to think this gross error of judgement won't follow him?

I hate to sound like Ed Miliband here but are we going to have an inquiry into all this?

When you look at bottom of email it has option to unsubscribe. When you click it says you have been removed from "cf members" clearly and obvious breach here! Not impressed

Shouldn't Howlett be making some sort of statement about this?????

I was going to vote Robinson before because I thought he was a nice guy, but after this, I have to say, I've changed my mind. Voting Cooper after this mess.

Everyone wants to get their candidacy viral shown in many of the candidates sponsoring posts on facebook. Matt made a wrong decision here, but like someone else has said - it is very easy to create such an email list.
If anything its CCHQ who have the problem, Matt has merely took an easy route to make his candidacy viral.