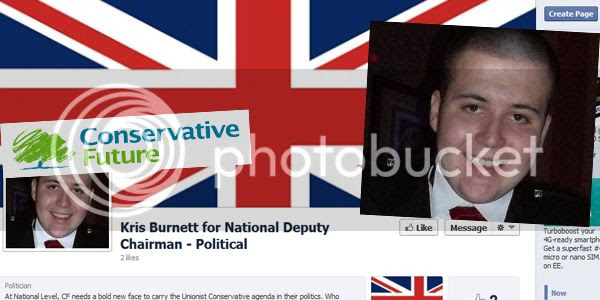 tbg can exclusively reveal that top Scottish CF'er and Unionist, Kris Burnett, has decided to stand for the position of National Deputy Chairman (Political) in the upcoming Tory Youth Wing elections.

Burnett is from Scotland, but currently lives in Redditch and serves as the Treasurer of Worcestershire Conservative Future.

Sources say he will be officially announcing his candidacy this Thursday through a "well-known Unionist blog" and has been trying to keep his announcement under-wraps.

However, tbg can also reveal that Burnett will be running on a platform of grassroots Unionism. He is also against the armed forces cuts and wants to hammer home the need for Party unity in the face of the 2014 Scottish referendum and 2015 General Election.

Burnett is set to use the following message in his campaign - "At National Level, CF needs a bold new face to carry the Unionist Conservative agenda in their politics. Who better than young Scottish Tory, Kris Burnett?"

Sources have told tbg Kris Burnett will be present at the West Midlands hustings this coming Friday in Birmingham.

I have to say I have never heard of them.

Nice to see the DCP race livened up. Not a well-known name but then, they're not in London. Have to see what his campaign is like.

He will never win, he's too new to the game. We need a good strong person, not a new fresh face. Good Luck to him anyway.