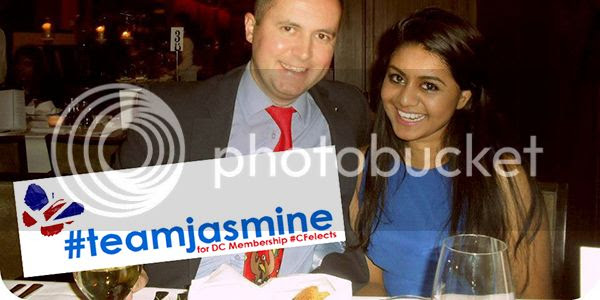 tbg can exclusively reveal its #TeamJasmine Q&A session in which much sought after 'Tory Talent' politician Jasmin Rahman declares she's back on track to become the next Tory Youth National Deputy Chairman (Membership).

After a bout of illness Rahman talks about her belief that she is strong enough to take a supporting lead in the Tory Youth Wing and reveals her flagship policy to tbg.

Jasmine also reveals she enjoys to lay-in, or salmon in the mornings and that she's still looking for her perfect Toryboy.

So, what was for breakfast today?

"I’m not really a big breakfast eater as I’d much rather have a bit longer sleeping… but when I’ve time smoked salmon and cream cheese bagels are always a winner, or pancakes & Nutella!"

You told tbg you just got out of hospital, is that having an impact on your campaign efforts?

"There’s never really a great time to fall unwell so it’s all been a matter of trying to fit CF commitments around getting better. Unfortunately not being on top form has meant I haven’t been able to make it to all the hustings and my website launch has been delayed, but I can assure everyone that now that I’m on the mend my campaign will be full steam ahead from here on!"

What do you say to those critics who think you are not strong enough to take a lead in CF as its supporting striker?

"As a Conservative I’m a passionate believer in the importance of hard work and supporting those whom have worked hard and become successful. Since joining the party I have made connections with CF branches across the country and this is what really sets me apart.

"I study in Durham, live in Birmingham and spend time in London, so I’m well located geographically to be close to many CF branches.

"A Conservative is passionate, ambitious and hard working. Everyone has their own personal challenges to overcome and my experience in event planning and within the party speaks for itself as to why you should all vote for me for Membership. It’s the right choice for CF."

"Make mine a lemonade... or disco water if there’s a party."

"I’d say my flagship policy is about making CF more accessible by broadening membership to reflect the wide spectrum of our party as well as attracting new members or those who may have defected. Launching the CF app is definitely going to be a key factor in increasing membership!"

What do you think of your opponent’s campaigns' and ideas?

"It’s terrific to see so many people contesting the position. There are lots of great ideas emerging, which I'm sure is because the competition is discouraging complacency and whoever wins, I'm sure will really improve CF membership if the ideas outlined in manifestos are introduced.

"At the end of the day I care about the Party first and foremost and whichever candidate wins I think it would be a credit to ensure the ideas of any runners up are looked into too."

tbg is aware that alot of people would like to know if you are single?

"Haha oh tbg that’s very flattering! All I can say to that is catch me if you can! Being a Tory, it’s all about finding Mr Right and there certainly are an awful lot of charming Toryboys..."

All I will say it is unlikely dan valentine is me right!

I heard she was seeing Richard Allen. They seemed very full on the other night!!

I definitely would. Miss Rahman you are the epitome of Tory totty!!!!!!!!

I've heard Richard Allen is full steam ahead with Jasmine!

Ha don't think you're on the right track there mate, everyone knows Allen is dating Gabriella Giles. Jasmine can do so much better than Rich!

Whoever Richard Allan is he is one lucky guy! To have teamjasmine on his arm is fucking golden! Mate, look after that girl because she is a gem an a half.

This has to be the best q & a. More on Teamjasmine please tbg. We love this girl!

Isn't jasmine dating a French banker? Someone as pretty as her won't be single long!

Jasmine and Richard Allen? I heard he's only hanging out with her to try and sway votes. He doesn't give a damn Baljit her.

Rich - sorry but I heard Hoff Stuff was there first!!
Xoxo

Hoff is with Gabriella? Sounds about right!

Gabriella Giles or jasmine? I know which I'd rather date. Seems Rich made the wrong choice if he's dating Gabi! Jasmine please come and have dinner with us? Love Your Northern fans

Whoever is with jasmine is a lucky lucky guy. I wish I could be her Aladdin so I can show her my magic carpet!

Jealous doesn't cut it. I will bury anyone who gets in my way. Jasmine will be mine. How often do you find a pretty, genuine decent tory girl?

Jasmine is dynamite for CF. she has to win! We love you jamsine. Someone as pretty as you deserves it.

I would smoke a salmon for jasmine any day of the week. No joke

Shall I pan your cake with Nutella teamjasmine? Ask me anytime ;-)

Not just a pretty face eh? A diamond at hustings. Rumours that she has a smoking hot manifesto and a stunner too? God where has she been all our CF life!

Jasmine Rahman you are a legend. Not only have you inspired us to have a new love for CF you have policy ideas. This is the way to do it. Very impressed over here on the South West. If you don't win we know which How is to blame for vote rigging.

Jasmine Rahman is the new face of CF. there's no two words about it!

So wich candidate are you backing Tbg? If this is anything to go buy we know which Tory is top totty! Teamjasmine we want you to win

Should the rest of us tory girls give up on the dating stakes... Clearly can't compete... ;)

Teamjasmine you are amazing. Can we party soon? I am a Tory and I'm voting you!

Jasmine you can pick any toryboy you want. Choose wisely. Make sure you pick one who looks after you, you will go far my dear. With a smile like that no one can resist!

I think what's so amazing about teamjasmine is that she's come out of nowhere and is genuinely a lovely girl! She isn't bitchy so I wouldn't worry about 'competing' with her! If anything jasmine is the sort of girl you want to be mates with! I think she's fucking awesome and I've met her once!

She could rub my magic lamp any day.

Jasmine I want your babies. Imagine having her as the mother of your children!

If jasmine can't get ukipers to defect no one can!

Jasmine Rahman where are you? I can't imagine a better candidate for membership. Win! We are all behind your hot behind.

That behind doesn't need to be on a slate! What a fittie.

I'd much rather see jasmine at my door with a leaflet. She'd make me a good morning. I'd definitely come if you know what I mean ;-) Richie Allen you know right?

Jasmine Rahman is so pretty! That guy is lucky as mud! I wish I had jasmine to go home to ;-)

Love the love for jasmine. I'd like a piece of that. No wonder Chris harries is besotted with her!

What's her favourite chocolate? I want to buy her some and take them to Eastleigh tomorrow!

UKIP, consider her candidacy a shot across the bow. We saw defections this year but next year with Jasmine at the helm they'll come flocking back!

I've heard Nabil has a crush on Jasmine. He thinks he has a better chance over Rich at getting #teamjasmined! Tbf she is totally hot. But can do a lot better than Nabil or Rich!

Allen is such a dark horse. Maybe they'll be going riding together?

Has jasmine ever thought of doing a Calendar? I'd vote to be under that Tory.

Hmmm comments at around 5:16am.

Who is actually up to comment on tbg then.

Maybe someone who is in a time zone +5.5 GMT like Mumbai. That would make it less of a late night troll more of a mid-morning flutter.

This can only be the work of Sam "Hoff Stuff" Rogers!

If this is true Richard Allen will be the envy of many Cf guys! Mate, you better make sure you don't screw things up with her!

I heard Rich is on SJ's side and that he is trying to find out jasmines tactics. He's a snake and wants to ruin teamjasmine as its messed up his slate. DON'T FALL FOR IT JASMINE you can do so much better than Richard Allen

Lets be honest, S-J is far hotter than Jasmine, not that she isn't attractive mind...

Jasmine is the prettier and nicer candidate. Vote teamjasmine!

Richard Allen what did you do to work your wicked ways? You sure better treat that girl like the princess she is! Mate, you struck the most sought after CF-totty

Rumour has it they are friends, in which case, WALK THIS WAY MISS RAHMAN.

Jasmine Rahman is very pretty in person. Saw her at the Red Lion last night. All I can say is wow. Which guy is with her? Is there any truth in it?

Jasmine Rahman needs to win membership! Who does Richard Allen think he is though? Dabbling from Gabriella to jasmine - team totty can do better than you so go away and stop trying to poison her with your pathetic ways. Richard's on SJ's side and is a massive puppet. Don't trust him jasmine! He doesn't even have the balls to comment back on here to any of the comments - you've been busted Richard. Now back off our fave Tory darling and go back to SJ

What about people who work hard and aren't 'successful' as she puts it.

The majority of young Tories are kids who have been brought up privileged and can't even comprehend what it's like for people who are struggling to make a living.

What about the people who work hard and aren't 'successful' as she puts it.

The majority of young Tories are kids who have been brought up privileged and have no idea what it's like to have to struggle to make a living.