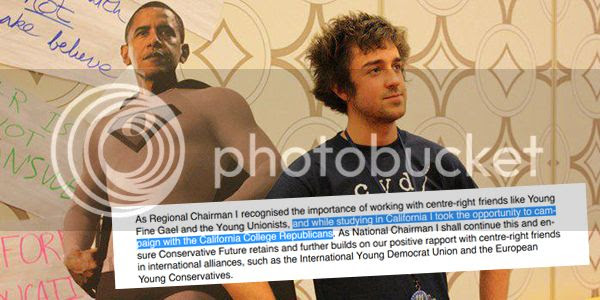 There are accusations of discrepancies over Conservative Future's National Chairman candidate Matt Robinson's manifesto and claims about his time spent in California, USA with Young Republicans, tbg can reveal.

It has been highlighted that the document may be sexed-up Right Wing style under the section for 'Policy, Debate, and International Co-operation' when the manifesto says -

"As Regional Chairman I recognised the importance of working with centre-right friends like Young Fine Gael and the Young Unionists, and while studying in California I took the opportunity to campaign with the California College Republicans. As National Chairman I shall continue this and ensure Conservative Future retains and further builds on our positive rapport with centre-right friends in international alliances, such as the International Young Democrat Union and the European Young Conservatives."

Matt Robinson attended and was pictured [PHOTO] at the Democratic Party Californian Convention in 2010 on social media donning his convention pass and a California Young Democrat t-shirt, he even posed with well-known Democrat and the 25th United States Secretary of labour, Hilda Solis [PHOTO].

A concerned CF member told tbg - "I know that a lot of CF members support the US Democrats and like Obama but saying Robinson has spent his time helping young Republicans is a bit hypocritical when he was doing exactly the opposite.

"I am not from anyone's campaign and I am undecided who to vote for but based on **** like this I certainly won't be supporting him."

While there seems to be mistrust from the tbg source about the manifesto claim, it is unclear whether Matt Robinson mingled with Republicans and Democrats but neglected to mention the Democrat bit. Considering the enthusiasm for Obama across the international political spectrum its hard to suggest why this might be the case.

Enthusiasm for Obama? What planet are you Tory lot on?! Ever heard of a drone strike?

The only good thing about Obama is that he's attractive

I'm sure he has a perfectly good explanation for being there, in a California Young Democrat t-shirt.

Got any photos with the Republicans Matt?

From what I understand Matt did a lot of work for Sam Blakeslee in Cali? Assume he's just taking the piss out of the Obama worship in that pic!

If the cooper campaign can only dig up this and make an issue out of nothing then they must be pretty desparate!

Doesn't cooper do the same and swan around UKIP events? A pox on all their houses!

From what I've heard, Matt has done a CONSIDERABLE amount of campaigning for the Republicans whilst he was out in the States and made a lot of great contacts.

Just because he attended one democratic event (and let's be honest, given the opportunity to gain more experience and insight into the American political world..who wouldn't go?!)doesn't make him a democrat campaigner. Sad that the only "dirt" TBG can publish is based on a photo taken completely out of context!

where's the dirt? There are several photos.

Several photos from a single event? Hardly leads to the manifesto containing "sexed up" discrepancies. Regardless, he's come a long way since.

Great to see TBG has turned into a full-time smear machine against the Robinson campaign.

At this rate Cooper and Holmes don't need to do any campaigning, TBG are doing all their work for them.

So was he at both or was he telling porkies? Fair question as it does feature in his manifesto.

Have you groomed him to be the CF Chairman YOU so desperately wish you could be, or sammit?

every time I log on to TBG I get a massive erection.

I dont really see the issue here. Oh I get it... Matt Robinson wanted to ensure he knew the full picture so went to a Democrat event but then years later he failed to give every last minute detail of his whereabouts in the last decade in his manifesto... Yeahhh what a bozo!! Lets all slate him because it would be a disaster to have a Chairman who took into consideration everyone's views before deciding who he aligned with. What would be way better would be an ignorant sheep who knew and considered nobody's views but his own??? You guys seem like a bunch of sensible people. I am so glad I have learnt this lesson from you

I won't be voting for him unless I see some proof that he didn't campaign for the Democrats.

I have to say Robinson looks rather fetching in that picture tbg!

not only is a hottie but he knows his stuff... i love matt

Wearing their t shirt? That can't be good. Can't imagine going to a labour party conference and wearing their tshirt.

Another scruffy leftist at the top of CF. Howlett 2.0