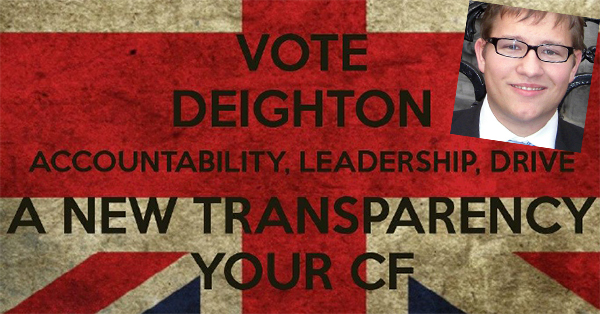 tbg can reveal that Tory Youth Wing candidate for Chairman is set to James Deighton launch his manifesto today, the same day as national election hustings are due to take place in Birmingham.

Deighton's manifesto states he will be a "Chairman not a President" and wants to run a nationally active Conservative Future (CF) Executive saying:

"I pledge to arrange ‘Meet the Chairman’ events in all the twelve regions, one taking place each month. I will hold quarterly national exec meetings in the regions. I will also co-ordinate national social and campaign events to coincide with these regional National Management Executive(NME) meetings."

Deighton also wants to give equal opportunities to NME elected members and give Best Practice the title of National Deputy Chairman:

"All the elected officers should be equal and given equal responsibilities. The Best Practice officer therefore should be a deputy chairman and considered as such. It makes no sense to undermine the authority of the fourth elected member of the NME who puts in as much effort as the others."

National CF Chairman candidate James Deighton also has ides for a quarterly CF Magazine, a twinning scheme for CF branches where strong established branches act as mentors and assist new or weaker branches, a yearly CF parliamentary rally to be held within the Palace of Westminster and redraft the CF constitution to put it to a vote at the next election.

Come on James, show them all that you're the cleanest, most decent and have the most promising plans of all of them!

What's the point in this? Deighton couldn't even be bothered to turn up to all the hustings. Pointless campaign.

James was the only person to turn up to one of the hustings and two of the candidates didn't even bother to respond to the invitation to attend that particular hustings.

One man one vote. Literally..
Get the message and pull out of the race!!

King in the North!

I bet some of my opponents and their supporters would like nothing better than for me to pull out but as I said before it isn’t gonna happen so give up.

How can it be too late to publish my manifesto when just this week we have had several more members join the election race?

I am running a clean campaign free of smears and attacks against my opponents which they all seem to be eagerly engaging in. I seek only to engage with members and talk to them about my experience of helping CF and its members up and down the country, and what I plan to do if I'm elected.

Read the manifesto and my policy announcements on my website at www.votedeighton.co.uk . There are some great ideas in there that I hope will bring these elections back to the topic of what the candidates will do for the members. After all that is what CF is all about not a few people’s egos and career ambitions.

Two hustings have been held so far; I went to both the Epsom hustings and then the London hustings. Deighton couldn't be bothered to turn up to the first hustings; I want a CF chairman who's more committed!

@8.10 get your facts straight, he sent his apologies as a family member was rushed into hospital and seriously ill. He had to be there. Pretty nasty to use personal circumstances such as those against someone, on one occasion only. James is usually extremely dedicated to CF commitments and travels probably more than anyone.


I like the thought of having a chairman that values people he loves. It's kind of a good sign!!