tbg can reveal that the three leading candidates for the Tory Youth Brigade's top job have sensationally been in a Twitter bust up, over policy.

Paul Holmes and Matt Robinson have strongly attacked comments made by their rival, Oliver Cooper, a few days ago via social networking.

Cooper's Twitter feed says that during hustings his rival candidates, Holmes and Robinson, said they told Tory Youth hustings to "ignore overseas alliances", a claim that has been strongly denied. 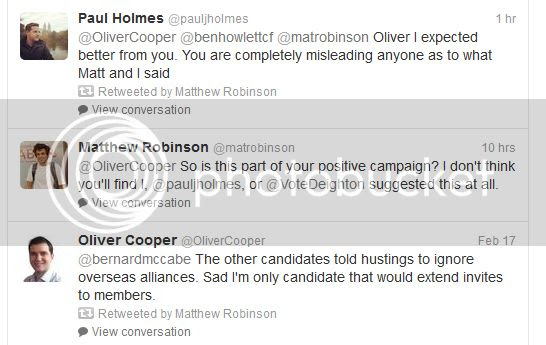 Is this seriously the best article you could write on TBG? Let down! How about finding out how our favourite Tory darling Jasmine is doing? which hospital is she in? I want to send her roses ;)