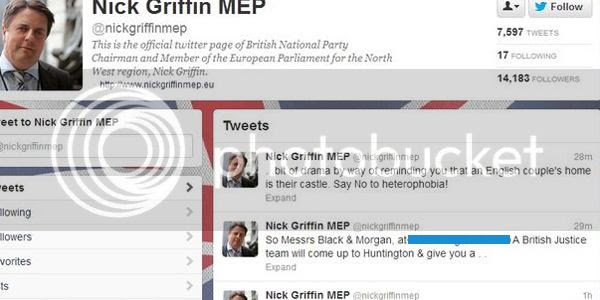 BNP Leader Nick Griffin is in a Twitter storm tonight after publishing the address of a gay couple whom successfully sued B&B owners for not allowing them stay there because of their sexuality.

I find it so galling that these religitards harp on about their beliefs being hurt. They can't have much of a strong faith if it can be upset so easily. Also, their own home or not it is open to the public, therefore discrimination laws apply. It is funny how these same people are not campaigning for the rights of this atheist child who has been refused entry to the Scout movement for his non-beliefs. I will never give them another penny and be quite happy to tell any adult in charge the reason why.

I just checked and his Twitter account has been suspended. And I hope he doesn't get back on.