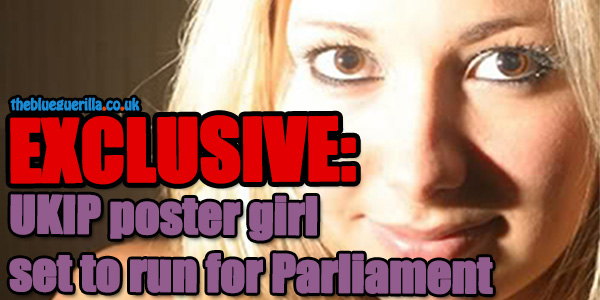 In an exclusive interview with tbg. Conservative to UKIP defector and columnist Alexandra Swann reveals how she lives in UKIP's rented house in Corby, what she had for breakfast, her radical politics and plans to stand in the 2015 General Election.

What have you been up-to today?

"I am currently living in the house in Corby that UKIP have rented for the by election so I can work from Roger's constituency office during the week and assist the Corby campaign during evenings and weekends.

"Today I woke up in a house full of UKIP activists, walked to the campaign office and spent an hour or so organising the various leaflets and invitations to our forthcoming public meetings with Prof Tim Congdon and Nigel Farage for delivery this week. I've spent the past few hours canvassing postal voters in the freezing cold and rainy East Northants villages and this evening I intend to have a very hot bath reading the Sunday Times magazines before going to see Skyfall."

What did you have for breakfast?

"Two apples smeared with organic whole nut peanut butter. I figure carbs and fat are okay when you know you'll spend the day walking about in the cold!"

You defected to UKIP this year so, why/how exactly do you think the Conservatives can not deliver on your personal political motives/beliefs and why UKIP can/do?

"I'm a Libertarian/anarcho-Capitalist; I am writing my PhD thesis on the works of Herbert Spencer and Auberon Herbert. I believe in a very small state, a flat rate of income tax, no death or job taxes, high levels of personal freedom, non-interventionism, grammar schools and national sovereignty.

"I joined the Conservatives because I thought they were the party that best represented my views. However, Cameron seems all too happy in Coalition; he accepts the populist rhetoric of banker bashing and criticising corporations who legally avoid tax.

"I realise that my own belief that taxation equals theft does not resonate with much of the electorate, that we have a huge national debt to deal with and strong public sector unions who oppose reform, but Cameron's Conservatism is so far from my own principles, from Thatcherism, that I could no longer support his party.

"UKIP, in contrast, are a libertarian, non-interventionist party; they would bring in a fair, flat rate of income tax at 20% which would be further reduced over time; they would abolish employers' national insurance, a tax on jobs, and the death tax.

"They would take people on minimum wage out of income tax altogether and would reintroduce grammar schools, a real tool for social mobility. UKIP also oppose the climate change policies that force the poorest into fuel poverty and push jobs and investment abroad. In short, UKIP stands for common sense, pro-individual, pro-business policies that I believe in and the Conservative party no longer does."

Are you likely to swap back?

Tell me the most interesting thing about yourself?

"I am soon to start retraining as a clinical psychologist; it's been an area of interest for a long time and I think anyone who wants a career in politics should have a real career, a hinterland."

You've enjoyed alot of exposure since defecting to UKIP, did you envisage the attention you now receive as a result of your move?

"Not at all. I have been surprised and flattered in equal measure. It has opened a lot of opportunities in journalism too which was an unexpected bonus. I'm now writing for a couple of mainstream papers in addition to my weekly column for The Commentator, my own blog and the Libertarian Press, which is nice."

Where do you do your weekly/monthly shop?

What are your plans for the 2015 General Election?

"I'm on the UKIP candidates' list and will stand wherever the party decide I am of most use or in South West Surrey. I'm standing next year in the Farnham Central ward for the Surrey County Council elections, then there are the Euros in 2014; three years are a long time."

She will never win a seat in her life

Difference between my own ideology and the policies I believe can be implemented as a step in right direction.

Grammatical errors not mine!

And if people wish to leave negative comments at least have good grace to put your name to them.

I respect your views but it sounds like even in Ukip you have to accept a lot of compromise!

I think Alexandra makes a lot of good points. She is right when she says there should be a flat rate of Income Tax at 20%, that people earning under a certain amount will be taken out of Income Tax and the state should not intervene all the time.

That said, these are STILL Conservative policies which UKIP have borrowed. UKIP are really the BNP in suits. A misogynistic, homophobic, transphobic rabble whose sole policy is get us out of the EU asap.

Great to hear such wise words from a young British lady - the people of the UK are lucky to have you fighting for us - long live the cause of freedom!

An "Anacho-Capitalist" doesn't favour taxes or a state at all. A Libertarian doesn't join a party that is as authoritarian as UKIP.

The comments about breakfast are nauseating. With all due respect she comes across as spoilt, narcissistic and immature on her Twitter feed. Not going to win a seat in UK parliament in a million years.

nothing wrong with populism. Should be more of it. nationalise the banks!