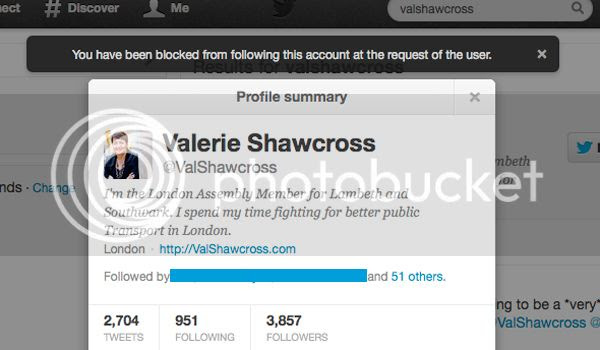 tbg. can exclusively reveal that the recently shortlisted Labour PPC for Croydon-North Val Shawcross has blocked Croydon-Central MP Gavin Barwell on Twitter, seemingly unwilling to enter a debate with her opponents and carry on living in La-La-Labour land.

Val Shawcross, whom is Croydon-North Labour PPC and a Labour London Assembly Member, has been reported as saying "it's time Croydon got noisy" about it's economy and jobs "crisis".

Shawcross told Croydon today - "This is a town in crisis, both in its economy and unemployment, and they need a very strong advocate.

"We cannot acquiesce when things are taken away. It's time Croydon got noisy in the interests of the next generation."

Such language just a year after Croydon did indeed get very noisy during the 2011 riots may not be all that responsible however, it appears Val Shawcross wants to silence at least one member of the Croydon population.