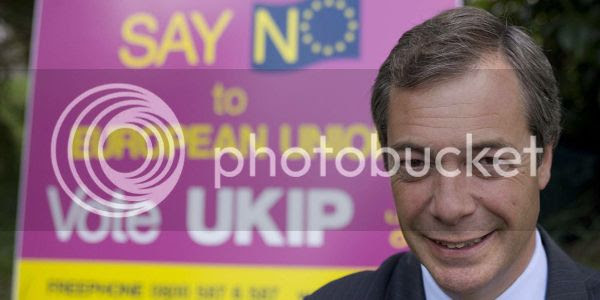 tbg. reported this past Sunday that UKIP leader Nigel Farage hinted he was interested in Lib Dem MP Chris Hunes' seat of Eastleigh, when he didn't rule out standing whilst on a walkabout in the town. Farage has now given the strongest hint yet that he indeed will run in a by-election if the seat becomes vacant.

Farage is reported to have today said: "I have absolutely no idea what is going to happen with Chris Huhne’s case but if Chris is found not to have told the truth then it is clear that his position as MP for this town will be untenable. So we face the prospect perhaps of an Eastleigh by-election – it could happen in October or November this year, perhaps spring next year but be assured if and when there is an election we will give it everything we have got."

As Farage is the only thing UKIP have got, tbg. expects him to run if the seat does become available.
Edited & Posted by The Blue Guerilla at 14:20:00

Wouldn't he rather defend the seat he won in Buckingham?