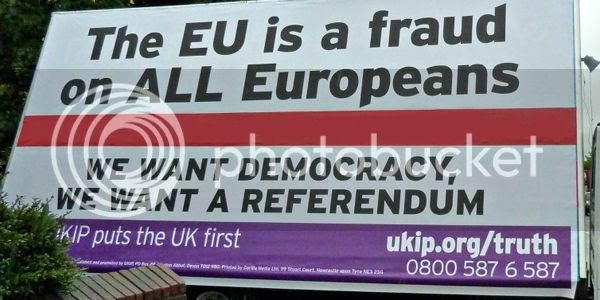 UKIP leader Nigel Farage has today delivered his challenge to the Prime Minister as revealed on tbg. yesterday. Farage wants to battle Cameron in a debate over whether or not the UK should have a referendum on EU membership.

Heres the letter delivered by hand today. He even calls the Prime Minister 'Dear'. Cute.

As you are well aware, the last time the people of this country were given a say on membership of the European Union was back in 1975.

This must have been a factor in your thinking when, in 2007, you gave a “cast-iron guarantee” to hold a referendum if you became Prime Minister. Since that promise, however, your message on the issue has been confusing and misleading.

You say the time is not right but refuse to clarify when the time will be right. You believe that leaving would not be in our best interests and an in/out referendum is flawed because it offers a “single choice”. In last week’s Sun poll, almost 70 per cent of voters said they would like a referendum. In the same poll, a clear majority said they would like to leave the EU and yet your plans would deny them that opportunity.

I believe the British people, along with many of your own backbench MPs, want and deserve a straight in/out choice in a referendum.

I propose a public debate between us where we can put our respective cases forward. My challenge to you is an open and honest one and I hope you will afford me, and the people of this country, a proper say on the matter.