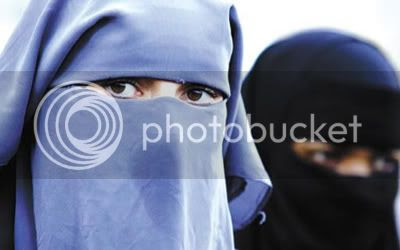 tBg thought it appropriate to begin his return with a post about an issue he holds dear, and that is personal freedoms and civil liberties.

It seems quite fashionable for Parliaments and Assembley's around the world to debate banning the Burqa at the moment. France has indeed brought in a ban while Spain recently rejected a ban citing personal freedoms.

A latest poll suggests 67% of Brits want a ban - without balanced debate.

Those in favour of a ban make points such as security, division and the rights of women. tBg can only see social division, probably due to negative media, as an issue. Anyone can put a mask on and commit a crime. And as far as the rights of women are concered, Tory MP Caroline Spelman was taken out of context all over the media, but she put it best:

"One of the things we pride ourselves on in this country is being free, and being free to choose what you wear is a part of that, so banning the burka is absolutely contrary I think to what this country is all about.

I’ve been out to Afghanistan and I think I understand much better as a result why a lot of Muslim women want to wear the burka.

For them, the burka confers dignity, it’s their choice, they choose to go out dressed in a burka. I understand that it is a different culture from mine but the fact is in this country women want to be free to choose whether or not to go out in the morning wearing a burka."

There are currently laws in place to stop domestic abuse. Therefore tBg wholey agrees with Carolines argument. Protection and expansion of personal freedoms and civil liberties is something that should be (and is) top of the current Governments agenda.
Edited & Posted by The Blue Guerilla at 12:04:00